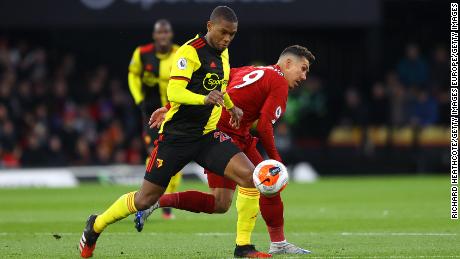 His celebration was in protest of the monkey chants he'd been subjected to by some Kortrijk fans in September 2015 in another Belgium Pro League game. The Belgium Pro League did not immediately respond to CNN Sport's request for comment, though the Royal Belgium Football Association pointed to projects that it has introduced to combat racism earlier this year.However, Kabasele, who now plays for Watford in the English Premier League, says the racist abuse he's received over social media is often worse than when he's been targeted in the stadium. READ: Why English football can't afford another 'lost generation' of Black coaches

The 29-year-old has been a strong voice in the fight against racism given his experiences during his professional career. Kabasele says he's received numerous abusive posts on his personal social media accounts and the Watford player urged platforms to do more in tackling the issue."When you're in the stadium, the fact that you are surrounded by other people, you just disconnect your brain and you do something stupid," Kabaselse told CNN Sport back in March, before the interruption of the Premier League season — due to the Covid-19 pandemic — as he reflected on some fans' racist behaviour."But when you write something on Instagram, or on Twitter, you have time to think about what you are doing and it's worse than something happening in a stadium. "It's quite incredible that somebody can think about doing this. Like this player did this so I will go on my phone and send him bananas or a monkey emoji. It's quite crazy."Kabasele, who has played twice for Belgium's national team, has reported such posts in the past, but says he has been disappointed by the lack of action from different platforms — such as Instagram — on occasion.Following the 2015 incident in Belgium, Kabasele posted a picture of himself with a monkey. He asked in his post if he "looked like a monkey."Kabasele told CNN that Instagram deleted his post, saying the footballer had broken their rules. He also said that he'd been targeted multiple times on the social media account, adding that when he reported the racist posts he was told the platform didn't see it as offensive."Racism is not tolerated on Instagram," said Facebook, which owns Instagram, in a statement sent to CNN Sport. "When we find content that breaks our guidelines we will remove it and we will ban those who repeatedly break the rules."We invest heavily in new technologies to protect our community and we recently introduced a new safety feature that allows public figures to prevent unwanted contact and control who messages them on Instagram.Instagram did not immediately respond to CNN's request for comment as to why it removed Kabasele's post. Twitter had not replied to CNN at the time of publication.Kabasele says whilst education is key to tackling racism, he wants social media companies to do more in holding people responsible for what they post. READ: Cricket star's anger over racist Indian nickname

In addition to comments online, Kabasele provided in graphic detail the racism he has suffered as a player.Having started his professional career in Belgium, the defender moved to Bulgarian club Ludogorets Razgrad in 2011 where he says he experienced racism on multiple occasions. He said almost every away game was marred by "monkey" chants or bananas thrown onto the pitch. On one occasion, while waiting for the team bus to depart, he says a fan confronted him and called him a "f**king N-word" before walking off with his friends. The Bulgarian Football Union did not immediately respond to CNN Sport's request for comment, but a Ludogorets Razgrad spokesman said: "It's very strange for me to read this. Because it's not true. We are a very tolerant nation." Kabasele was in his early 20s when he went to play in Bulgaria, but found the experience extremely unsettling. Looking back, he wouldn't again play in Bulgaria given what he went through as a young player there."When you see this kind of thing, you understand that people are really closed and they don't want to be open to someone different, somebody from another culture, another country," said Kabasele."If now you tell me you can go there and work in this kind of country, I will probably say no because I don't want to live this again." 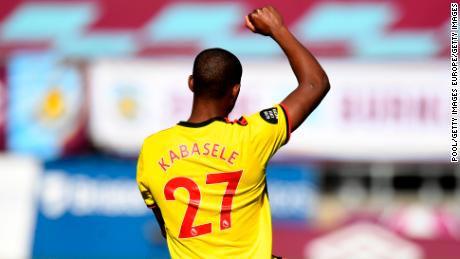 READ: How the scourge of racism continues to tarnish English footballIn 2019, Bulgaria was punished with a one-time stadium ban by UEFA for the racist behavior of its fans during a Euro 2020 qualifier against England. As well as the monkey chanting, some Bulgarian spectators made Nazi salutes during the game in October 2019. The president of Bulgaria's football association Borislav Mihaylov stepped down following the game after pressure from the country's Prime Minister Boyko Borissov.Kabasele has continued to report the abuse he's received during his playing career but tries to keep such experiences away from his family, including young children, in order to protect them.However, since moving to England,Read More – Source