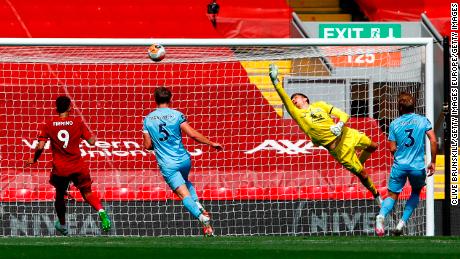 Andy Robertson's arcing header gave Liverpool the lead, but Jay Rodriguez's clever second-half finish ensured the Premier League champion dropped points at Anfield for the first time this season.The draw moved the Premier League champion to 93 points. Manchester City achieved a record points tally of 100 in the 2017-2018 season.If Liverpool wins its remaining three games — against Chelsea, Arsenal and Newcastle United — Jurgen Klopp's team would finish the season on 102 points.Burnley goalkeeper Nick Pope denied Liverpool with several superb saves, notably from Mo Salah and Sadio Mane, while Roberto Firmino also hit the post for the home team.READ: Liverpool breaks yet another Premier League recordThe visitors almost secured a shock win when Johann Gudmundsson hit the crossbar late on."We pushed on in the second half and after they scored I thought we played very well," Pope told BT Sport. "Unfortunately it didn't quite go for us. We work hard for one another — that's a massive part of our success. We don't just rock up on a Saturday without a plan."Manchester City holds the Premier League record for most wins in a season — 32 — as well as that remarkable 100 points landmark. Liverpool won't find it easy to surpass those records given two of their three remaining games are away from Anfield "It was a really good game but we left the door open for Burnley and we should have closed it, We should have scored two, three or four goals at least," Klopp told BT Sport."Of course it is frustrating, we should have scored much earlier. We warmed Nick Pope up and at the end he was properly really warm, he made some sensational saves."It's our fault because we should have closed the game but we didn't do. Burnley is a team who stay in the game and they have two top strikers who constantly go for each ball. It's an intense period and at the end we were pushing up and they are always Read More – Source