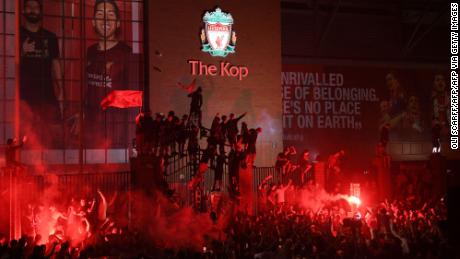 Contrary to government guidelines, fans gathered outside the stadium as Chelsea defeated Manchester City last month and Liverpool's 30-year wait to be crowned English champion came to an end. Flares and fireworks were set off as supporters congregated outside Anfield, and now authorities have warned the public to avoid the stadium during Liverpool's game against Chelsea, which will be followed by the official trophy presentation.Visit CNN.com/sport for more news, features and videos"On this occasion, the best seat in the house is in your living room," said assistant chief constable Natalie Perischine from Merseyside Police. "There is simply no benefit to going to the ground and we as a city cannot afford for people to gather in large numbers."We are all still in unprecedented times due to the Covid-19 pandemic and the last thing anyone wants is a resurgence of cases in Merseyside, with every life lost a tragedy."Matt Ashton, director of public health at Liverpool City Council, said that the threat of a second lockdown is "very real" in the city, while Peter Moore, CEO of the football club, emphasized that "nothing is happening outside of the stadium" during Wednesday's game.READ: Errors end Liverpool's record points chase with defeat at Arsenal"It's gutting for all of us that our fans are not with us in person, but we can still make this one of the most enjoyable shared experiences we've ever had if we want it to be," said club captain Jordan Henderson in his notes to Wednesday's match program."If anyone reads this column or these words prior to the evening of the match, I cannot say clearly enough it is critically important you stay away from Anfield and enjoy celebrating with us in your own way, at home."According to UK government figures, there have been 2,485 confirmed cases of the coronavirus in Liverpool with the North West of England the worst-affected part of the country.Liverpool has suffered defeats to Manchester City and Arsenal since wrapping up the title, and Wednesday's opponent Chelsea, currently third in the table, still has pleRead More – Source