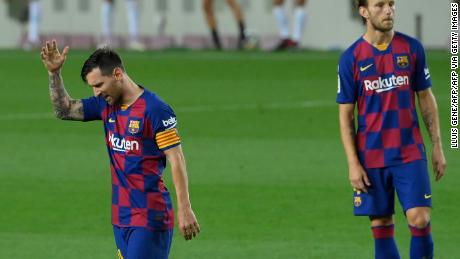 Barca had just suffered a shock 2-1 defeat to 10-man Osasuna, its first on home soil since November 2018, and if that wasn't bad enough had to stomach the thought of bitter rival Real holding aloft the La Liga crown that had just been prized from its grasp.The Catalan team has been in turmoil both on and off the pitch for some time now, so perhaps a performance and defeat like this one should no longer come as a surprise.Lionel Messi, the club's captain and talisman, cut a frustrated figure on the pitch. So much so, that he threw his arm up in annoyance when scoring Barcelona's equalizer in the second half, rather than celebrating."We didn't expect to finish in this way, but it sums up the year for us," Messi told Spanish television after the match."We have been an erratic and weak team, who can be beaten with enough intensity and enthusiasm. We have lost a lot of points which we shouldn't have done and been very inconsistent. "We need to be self-critical, starting with the players but also across the entire club. We are Barcelona and we are obliged to win every game."The feeling on this team is that it tries, but that it cannot get the job done. Today in the first half they were better than we were and it seems we have to fall behind to react like we tried to do in the second half."READ: Real Madrid crowned La Liga champion for first time since 2017 with victory over VillarrealMessi's free-kick just after the hour mark had canceled out Jose Arnaiz's opening goal for Osasuna, but Roberto Torres stunned the host in the fourth minute of added time by rounding off a swift counterattack.Real Madrid's victory against Villarreal meant even a win for Barcelona wouldn't have taken the title race to the final day, but the contrasting performances — in particular since the restart following the enforced break due to the coronavirus pandemic — mark a huge turnaround in fortunes for Spain's two top clubs.This time last season, Barcelona was celebrating its 26th La Liga title while Real Madrid languished in third place, 19 points off the pace. In just over a year, Zidane's side has closed that gap and surpassed Barcelona as undoubtedly the best team in Spain.Quique Setien, who was in charge at Real Betis the last time Barcelona lost at the Camp Nou, was brought in at the start of the year to bring some excitement back to the club; instead, it appears he is already fighting to retain his job.While Real Madrid went on a 10-game winning run, Barcelona has struggled for results since La Liga restarted. But perhaps more importantly, it has struggled to find an identity under Setien.The coach has always been bullish about his position, but admitted after Thursday's defeat that he didn't know whether he would remain in charge for Barcelona's upcoming Champions League second leg match against Napoli."I am responsible for our situation, as I am the manager of the team," he told reporters. "I hope to be the Barcelona coach in the Champions League, but I don't know. I agree with Messi on some things. We have be self-critical and if we aren't, it will cost us in anything we want to do.READ: Lionel Messi will finish his career at Barcelona, Read More – Source