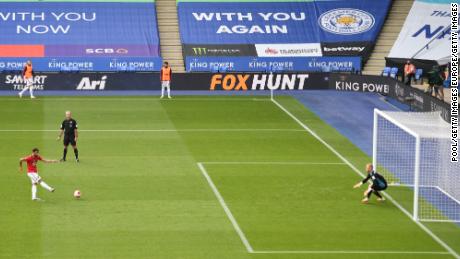 The three teams were separated by just one point heading into Sunday and Chelsea beat Wolves 2-0 at home to book one of the spots with both goals coming in first-half injury time. Follow @cnnsport That meant Leicester needed to beat Manchester United for the other place but instead it lost 2-0 at home thanks to a Bruno Fernandes penalty in the 70th minute after opposing striker Jamie Vardy — who still finished as the league's top scorer — hit the post. It was United's record 14th penalty of the season and Fernandes has never missed one at the highest level, according to Sky. Former United defender Jonny Evans was sent off in injury time for a foul on Scott McTominay, with Jesse Lingard later adding the second goal. Manchester United and Chelsea finished on 66 points — United got third with a better goal difference — and Leicester City 62. United was set to lose around £70 million ($90 million) had it missed out on the top four but flourished in the league since it restarted in June after being halted due to the coronavirus pandemic. Much of that was down to attacking midfielder Fernandes, who was signed from Sporting Lisbon in January. The Red Devils trailed Leicester by 11 points in January. "I think the boys have done a great achievement," United manager Ole Gunnar Solskjaer, under pressure in January when results dipped, told Sky. "Where we were earlier in the season, to end up third is fantastic by them. They've taken on board so many things. Had our ups and downs. "It of course came down to the last game and it's a wonderful achievement by everyone." Leicester manager Brendan Rodgers said on the eve of the game it would still be a good season for his side if it didn't qualify for the Champions League but he is sure to be bitterly disappointed.Not only did Leicester lead United by double digits but in December it held a 14-point cushion in the race for the top four. Leicester didn't beat any of the sides that finished in the top five all season, though sustained key injuries down the stretch. "I can't fault the spirit," Rodgers was quoted as saying by the Leicester Mercury. "Next year it's about ambition." Chelsea wasn't considered a top four favorite as it dealt with a transfer ban but in his first season as manager at Stamford Bridge — after a glorious, trophy filled playing career for the Blues — Frank Lampard is on course for an impressive double. Next week Chelsea will win the FA Cup if it defeats Arsenal. "It means a great deal" to finish in the top four, Lampard told Sky. "I suppose at Chelsea we have to be careful getting excited with top-four finishes but coming into the job I don't think a lot of people put us in that bracket."

At the bottom of the table, Watford and Bournemouth suffered relegation to join Norwich City, which was already relegatRead More – Source