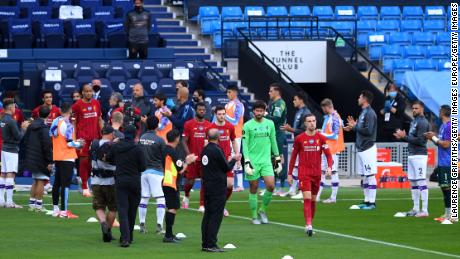 After ending its 30-year wait for a top-flight English league title last week, Liverpool were given a guard of honor by its opponents as the players made their way onto the Etihad Stadium's pitch.But after Mohamed Salah's low drive hit the post early in the game, three goals in 20 first-half minutes from Kevin de Bruyne, Raheem Sterling and Phil Foden stunned the Reds.An own goal from Alex Oxlade-Chamberlain capped off a terrific display for City, meaning Liverpool's defeat is the joint-heaviest defeat by a team already crowned Premier League champions in a season, along with Arsenal's defeat at Anfield by the Reds in 1997/98.After Thursday's game, Liverpool manager Klopp hit back at questions from the media, defending the desire and work ethic of his team."If you want to lead the story in the direction that we were not focused on that game, then do it," Klopp told Sky Sports."I saw a brilliant attitude. I saw fight. We didn't behave like somebody who became champions a week ago."READ: Back to the Future: As Liverpool party, 30 years ago the world was a very different place

'Best team I've ever faced in my career'

Having ended the long wait to claim that elusive title — its first since 1990 — and the videos of celebrations afterwards, it is perhaps surprising the fast start Liverpool's players made on Thursday.Salah's early escapade came close to breaking the deadlock when his shot cannoned off the post and Liverpool's front three created their fair share of openings.However, City's devastating attacking, led by the brilliant de Bruyne, quickly took the game away from the Merseyside club.Manchester City were awarded a penalty after Liverpool defender Joe Gomez tangled with Sterling in the 24th minute which de Bruyne duly converted. 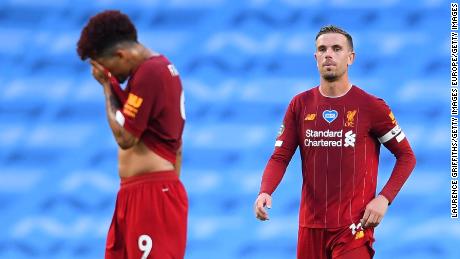 Sterling doubled the lead shortly after, finishing off a quick counterattack, before 20-year-old Foden made it three before the break, becoming the youngest player to score and assist in the same game against Liverpool in the Premier League.The result was sealed in the second-half after Sterling's shot was turned into his own net by Oxlade-Chamberlain.City manager Pep Guardiola praised Liverpool after the game, calling them the "best team I've ever faced in my career" and said the fast start was evidence that their title celebrations did not distract from the game."I think they drunk a lot of beer the last week, but they were here with no beer in their blood and to win this game," the Spaniard told BBC Sport."I saw a team with incredible focus, with energy and a desire to win the game."After the game, Manchester City's official social media account taunted Liverpool with a post comparing the scorers (and defender Aymeric Laporte) to the famous Merseyside musical legends The Beatles.READ: Changing doubters to believers. HRead More – Source