Liverpool gets Premier League title celebrations back on track 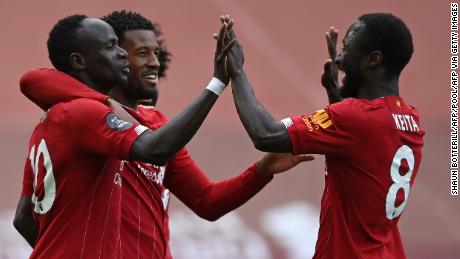 Many had suggested Jurgen Klopp's side was suffering from something of a hangover during Thursday's 4-0 demolition at the hands of Manchester City — the joint-heaviest defeat by a team already crowned Premier League champion — but Liverpool recovered in time to put relegation-threatened Aston Villa to the sword.It wasn't all plain sailing at Anfield on Sunday as Villa wasted several good opportunities to take the lead, before Sadio Mane eventually broke the deadlock after 71 minutes. Villa, who gave the host a guard of honor before the game, had further chances to level the scores, but Liverpool youngster Curtis Jones wrapped up the victory in the dying moments with his first Premier League goal.It caps off a perfect weekend for the 19-year-old Jones, who signed a new five-year contract with his boyhood club on Saturday.READ: Back to the Future: As Liverpool party, 30 years ago the world was a very different placeREAD: Liverpool's title-winning celebrations dampened after thrashing from Manchester CityKlopp cut a forlorn figure following the defeat to City and became irritable with simple questions from a reporter after the game, though his mood will likely be much improved on Sunday evening.Some had questioned Liverpool's desire to go out and win after securing the club's first top-flight title in 30 years. Those doubts were surely answered with a battling performance against Villa.Victory maintained Liverpool's perfect home record in the Premier League this season, with 17 wins from 17 matches, and also keeps the club on course for the record Premier League points total.Manchester City's "Centurions" of 2017/18 Read More – Source