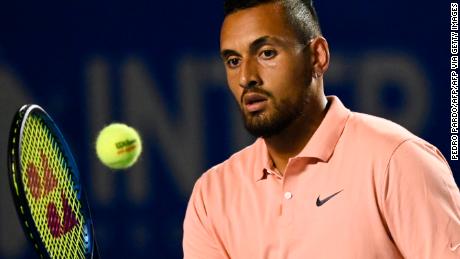 The Australian tennis star is once again caught up in a spat with a fellow player after Dominic Thiem defended those who took part in the controversial Adria Tour.A host of stars — including Novak Djokovic — tested positive for Covid-19 after competing in the tournament which attracted large crowds and where social distancing wasn't in place.Alexander Zverev was another to take part in the event and, despite his negative test, announced he would self-isolate as a precaution.However, a video emerged on social media a few days later appearing to show the German partying in a Monte Carlo nightclub.Despite this, Thiem seemed to take issue with Kyrgios for criticizing Zverev, telling Austrian media that the youngster had just made a "mistake.""I don't understand why a lot of people want to interfere. Kyrgios did a lot of mistakes himself. It would be better for him to come clean instead of criticizing others," said Thiem, who had taken part in the tournament.READ: Serena Williams takes to the tennis court with daughter Olympia

Kyrgios, who has stood firm on his coronavirus stance since the start of the pandemic, did not take kindly to the comment and took to social media to have his say. "What are you talking about @ThiemDomi? Mistakes like smashing rackets? Swearing? Tanking a few matches here or there? Which everyone does?" he wrote on Twitter."None of you have the intellectual level to even understand where I'm coming from. I'm trying to hold them accountable."He later said that Thiem, Djokovic and Zverev were treating the pandemic as "a joke" with two of them partying "like potatoes." "People losing lives, loved ones and friends, and then Thiem standing up for the 'mistake', these guys are the 'top' of our sport," he added. Kyrgios has called the decision to host the tournament "boneheaded" and labeled Boris Becker a "doughnut" for taking issue with his criticism. Djokovic issued a statement saying sorry the tournament "caused harm."READ: Novak Djokovic and the Adria TRead More – Source