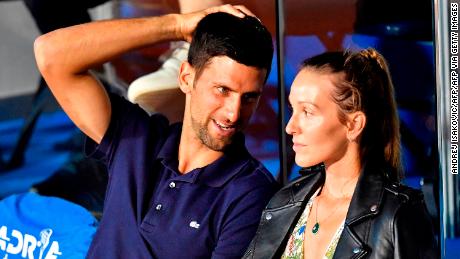 A host of stars, including world No.1 Djokovic, tested positive for Covid-19 after competing in the tournament, which attracted large crowds and had limited social distancing in place, with players hugging and high-fiving each other, playing basketball and dancing together.Djokovic, who bore the brunt of the widespread backlash, has since apologized for his involvement in hosting the event in the Balkans, saying in a statement he was "deeply sorry our tournament had caused harm."Fellow professional Nick Kyrgios said hosting the event was "boneheaded" and criticized other players, including Thiem, for taking part. Despite now admitting the tournament — initially scheduled to be played in four cities from June 13 through July 5 — was a mistake, Thiem says Djokovic was only trying to do something positive. "It was unfair to him because he didn't break any law and he didn't force us," Thiem told CNN Sport's Patrick Snell. "He didn't force any player to come there. He didn't force any player to interact with the fans."It was our own decision. The whole event was for a very good cause as well."The tour had attracted three-time grand slam finalist Thiem, world No. 7 Alexander Zverev of Germany and three-time major semifinalist Grigor Dimitrov of Bulgaria, among others. Djokovic's 24-year-old brother, Djordje, was named tournament director.On June 21, it was announced Dimitrov had tested positive for coronavirus and organizers swiftly canceled the entire series. Troicki would later test positive, as would Croatia's Borna Coric, Djokovic, his wife, Jelena, and others. Thiem says the players got carried away with the joyous occasion which, at the time, looked at odds with the local government advice to stay one meter apart. "It was obviously a mistake from everybody but it's a long time ago now really and everybody who got positive there is healthy again, which is a very good sign as well," he said, before adding that everybody had learned from their mistakes. "In reality, we saw happy fans, we saw happy kids and then we kind of forgot to keep the distance, to not take pictures, to not hug the kids and it was a mistake. "Everybody regrets it, of course, but I think, at the same time, it's fine now."READ: Kyrgios calls Becker a 'doughnut' after being labeled a 'rat' 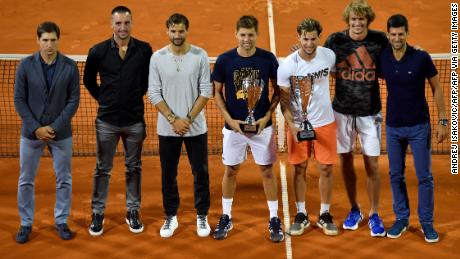 Thiem recently played in, and won, the Bett1Aces tournament in Berlin — an event which adhered to social distancing guidelines and was partly played in an old airport hanger. He's now turned his focus to the US Open, which is due to take place behind closed doors at the end of August. The Austrian says he has no concerns about participating in New York and says the competition in Berlin can be an example of how to stage an event safely. "If it's going to happen, I'm very sure that it's safe and that I'm also going to play because I guess it's time that the normal tour is coming back," he said, admitting it will be hard to play a grand slam without thousand of fans in the stadium. "It's tough to imagine but, at the same time, it is how it is and we have to deal with it."I think the main thing is that the tour, and the tennis, slowly comes back."A number of high-profile players have raised doubts about whether the US Open should go ahead this year but organizers are content with the safety precautions in place. They received a boost when Serena Williams confirmed she would play at Flushing Meadows and now sister Venus has expressed her wish to be involved. "God willing you will see me in New York. If it is safe to play, I really want to play the US Open," Venus said on her YouTube channel. Read More – Source