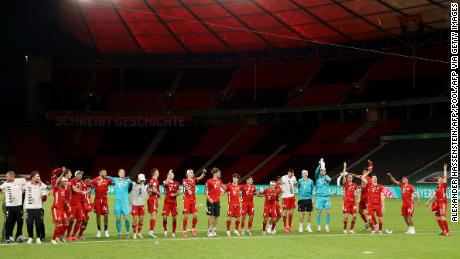 Bayern Munich came out on top in a thrilling German Cup final, beating Bayer Leverkusen 4-2 to secure its 20th title and remain on course for an historic treble.David Alaba's stunning free kick and Serge Gnabry's clinical finish gave Bayern a commanding lead heading into half time and Hans-Dieter Flick's side seemingly already had one hand on the trophy.However, Leverkusen responded well early in the second half and had a golden opportunity to halve the deficit through substitute Kevin Volland.Moussa Diaby showed blistering pace to breeze past Alphonso Davies — widely considered the fastest player in German football — and put the ball on a plate for Volland, who totally miscued his effort and missed the shot completely.It would prove to be the decisive moment of the final, as Bayern went up the other end almost immediately and put the game beyond doubt after a nightmare moment for Lukas Hradecky saw the Leverkusen keeper fumble Robert Lewandowski's shot into his own net.READ: Bayern Munich clinches eighth consecutive Bundesliga as Manuel Neuer reflects on football int the age of coronavirusREAD: Joshua Kimmich says white players should stand with their black teammates in showing solidarityIt would go down as the Polish striker's goal — certainly not his prettiest — and took his total tally in this record-breaking season to 50.Leverkusen did eventually get a goal through Sven Bender, but it was little more than a consolation, as Lewandowski grabbed his second of the game — and 51st in just 43 games this season — to make it 4-1 with less than a minute to play.There was still time for the video assistant referee to get involved and add some extra drama after Davies was deemed to have handled the ball in the penalty area. Kai Havertz, one of the most exciting talents in world football, stepped up to the spot and smashed the ball into the top corner.Havertz kicked the turf in frustration, knowing the goal was in vain and, almost as a cruel joke, referee Tobias Welz blew the whistle for full time as soon as the ball had nestled in the back of the net. 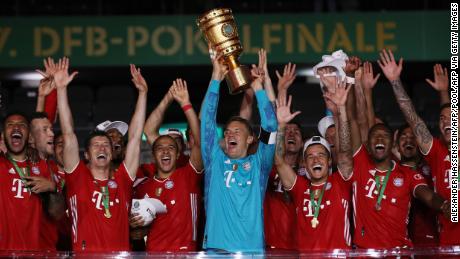 Football has continued without fans for several weeks since the sport's return across Europe following the coronavirus lockdown, but the absence of noise from the teams' supporters make even an occasion like this feel somewhat hollow.As the Bayern players lifted the trophy, their cries and shouts of joy could clearly be heard echoing around the empty stands of Berlin's ORead More – Source