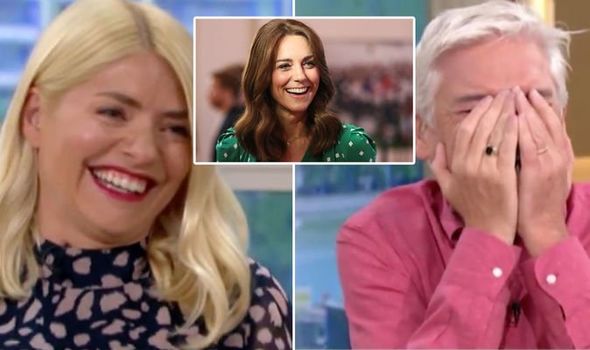 HOLLY WILLOUGHBY returned to her regular slot on This Morning today alongside Phillip Schofield. However, she was forced to issue an apology to the Duchess of Cambridge Kate Middleton when she made an unfortunate slip-up.

This Morning kicked off today with Holly and Phil paying tribute to the late wartime singer Dame Vera Lynn after she died earlier this morning. The pair spoke with TV presenter Esther Rantzen about the singer before the pair moved on with the show welcoming guests such as Martin Lewis and Carol Vorderman onto the programme. Today’s episode appeared to go without a glitch until Holly and Phil discussed the Duchess of Cambridge‘s photo-sharing campaign, which ends today.

The Duchess of Cambridge has been encouraging people to share their own snaps from their experiences in lockdown.

The campaign has been welcomed by thousands up and down the country with people keen to share an insight into their own lives during these unprecedented times.

However, the campaign comes to an end today and Holly and Phil decided to give a last-minute bit of encouragement to applicants.

In true This Morning style, however, it didn’t go according to plan.

Phillip informed viewers: “The deadline for phot submissions is actually today and it’s at 6pm.”

Holly then detailed how viewers could enter as she began: “Yes, to upload your photos head to NPG.org.uk forward slash hold -”

The This Morning host found herself slipping up on her words.

Not one to be defeated, Holly attempted to read the web address again as she said: “What did I just say there?

“I even practised this and I got it wrong! Let’s do it one more time shall we?”

Phillip quickly interjected as Holly had delivered the wrong address second time around.

“Hold dash still,” he pointed out, prompting Holly to quip: “There you go, we’ll put it on the screen,

“Read it yourselves it’s quite a complicated one.”

The blunder brought an uncontrollable laugh from Phil who held his head in his hands.

Holly also saw the funny side as she continued: “This is my actual job to read stuff and I can’t do it sometimes.

“I didn’t believe there was a final dash between ‘hold still’. Unnecessary I think.”

The pair quickly found themselves in fits of laughter once again before Phil chimed: “Shall I tell the Duchess of Cambridge or shall you?”

Through her laughter, Holly apologised for the blunder, saying: “Sorry ma’am.”

The pair managed to regain their composure as they moved on with the show.