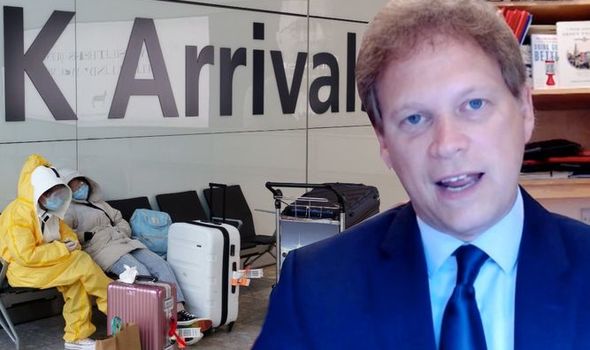 THE UK government has been under fire in recent weeks after its introduction of a mandatory quarantine period for arrivals into the UK. This morning, secretary of state for transport Grant Shapps told the BBC rule is set to be reviewed as planned in the coming weeks.

In recent weeks the UK government has come under fire from airlines and travel companies after it imposed a mandatory 14-day quarantine period for arrivals into the UK. However, speaking to BBC News this morning, Secretary of State for Transport Grant Shapps explained a planned reevaluation of the measures is just weeks away.

Although the minister says he believes there is “high compliance” from those arriving into the country, the rule has caused concern for many as it makes the prospect of holidays near-impossible.

Under the current rules, all arrivals into the UK, regardless of citizenship, except those arriving from Ireland, the Channel Islands and the Isle of Man, must endure a 14-day period of self-isolation.

Upon arrival into the country, travellers must give the address of where they are staying for the quarantine period, and authorities are allowed to check in on them at any time.

Those found not to be complying with the rules will face fines of up to £1,000.

“We have worked very hard as a society to get on top of and beat this virus.

“We don’t want to be in a position where we reimport it, or Brits go abroad and bring it back with them, so we absolutely don’t want to see that happen,” Mr Shapps told BBC News.

“Quarantine isn’t people being taken to a location, its asking, requiring in fact, people to quarantine themselves for 14 days when they get here.”

Despite the government’s reasoning, however, travel insiders have been quick to condemn the new rule as destructive to the already suffering industry.

Ryanair, easyJet and British Airways and amongst airlines who have publicly spoken out on the matter.

Now, Mr Shapps has revealed that the regulations are set for a review by the government.

He also offered a glimmer of hope at the prospect of “air bridges” with participating countries in the future.

“The actual date for the review is the 29 June on the 14-day quarantine,” he said.

“We are, and I am, actively looking at whether we can introduce air corridors or international travel corridors, perhaps with reciprocal arrangements with other countries.”

However, Britons will have to wait a few weeks before there could be any changes to the current travel rules.

Mr shapps said there would be no new information released “in the next week.”

He warned: “Make no mistake, we can not be in a situation where having as hard as everyone has to get on top of this disease, that we rather carelessly allow it to reinfect.”

Although the government may be rethinking its decision, Mr Shapps appeared certain the measures were working effectively, and that travellers were taking them seriously.

He said: “We think [there is] high compliance, this has been the case with almost everything with his virus.

“We think 90 percent or greater and we have people checking up so you will end up being fined if your fragrantly ignore this.”

Despite the high compliance, Ryanair CEO Michael O’Leary has said that the quarantine period is both “irrational” and “ineffective”.

He said: “What it is going to do is bring untold devastation.

“Not just to the airlines but to British tourism and thousands of hotels.

“Thousands of visitor attractions and restaurants in the next couple of months.

“July and August are the key months for the British tourism industry and we are facing thousands of job losses because of a stupid ineffective quarantine.”