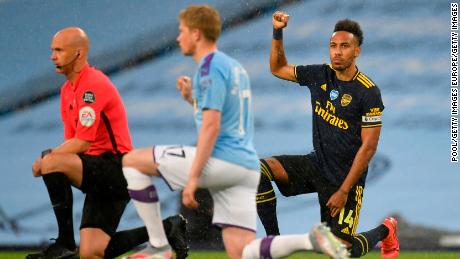 Players, coaching staff and officials all got down on one knee at the start of both matches on Wednesday as England's top-flight division returned from a 100-day hiatus. The powerful images paid tribute to the 'Black Lives Matter' movement which has grown in prominence since the death of George Floyd. "I see it as a massive step for the Premier League to allow something like that to happen and it shows we're going in the right direction," said Sterling, who scored the opening goal in his side's 3-0 defeat of Arsenal. "Little by little we're seeing change. It was natural, it was organic. We saw the teams do it in the earlier kick-off and thought it was something we had to do as well."READ: English Premier League returns after 100-day hiatus but not everyone is happy

The Premier League had previously confirmed players would not be punished for taking a knee before or during the games as it stood united against all forms of discrimination. Names on the back of players' jerseys were also replaced with the words 'Black Lives Matter' and a badge supporting the movement will be visible on every shirt for the remainder of the season. It's a message supported by City manager Pep Guardiola who said white people should apologize for the way "we treated black people in the last 400 years.""I feel ashamed for what we have done for black people around the world, not just America; the problem is everywhere," he told a post-match news conference. With soccer leagues resuming amid the pandemic, clubs and their players have been standing in solidarity with Black Lives Matter.Real Madrid's Marcelo took a knee and raised his first during a goal celebration this week whilst Borussia Dortmund's Jadon Sancho revealed a 'Justice for George Floyd' t-shirt after scoring in the Bundesliga. READ: Premier League players take a knee — and make a standThe movement has also made people reflect and question their own past actions. Former Manchester United defender Gary Neville recently apologized to Sterling for advice he gave the young forward when he was on international duty for England. Sterling had felt targeted at Euro 2016 and had asked then-coach Neville how he should deal with it. "When I look back on that meeting now and the words I used, I feel like I let you down," Neville said in an interview on Sky Sports."I feel like my primary thought was about how other players had suffered abuse, whether it be Paul Gascoigne or David Beckham or Wayne Rooney, but I now recognize and feel like that was totally inappropriate. I failed to recognize the personal side."Those players were receiving abuse for football errors or football performances. You were receiving targeted abuse that was constant before a ball had been kicked at the tournamRead More – Source