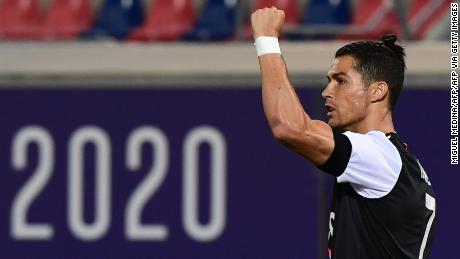 Ronaldo gave his side an early lead after converting from the penalty spot before striker Paulo Dybala doubled Juve's lead before halftime. The win takes them four points clear at the top of the table with its closest rival Lazio playing one less match. The two teams meet in Turin on July 20.Juve's win on Monday marked a welcome return of form for a team that's failed to score in normal time in both of its matches since Italian football restarted amid the pandemic. Juventus was beaten by Napoli on penalties in the Coppa Italia final on Wednesday after a goalless draw. In the semifinal second-leg Juve had drawn 0-0 against AC Milan, qualifying for the final on the away goals rule."We knew Juventus would be angry," said Bologna coach Sinisa Mihajlovic after the game. "It's almost impossible for them to slip up three games in a row."READ: The boy from the town "where dreams seem unreachable" who became a global superstarRonaldo, who has scored 26 goals in 35 games for Juve this season across all competitions, hadn't netted in his previous four games.He dispatched his penalty after VAR spotted Matthijs de Ligt had been brought down by Stefano Denswil as a corner was whipped in. Although the visitors have struggled for goals recently, it's firepower is undeniable and Dybala put the game to rest with a thunderous strike. Juventus is yet to tie down Dybala beyond the summer of 2022 with a some of Europe's top clubs interested in signing the striker. "Obviously I am a player of this club and I am happy Read More – Source