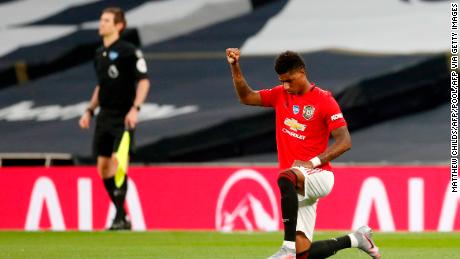 It was only three days ago that the 22-year-old became a national hero with his free school meal campaign that forced the UK government into a U-turn but the forward was unable to inspire his side to victory in its first game since the Premier League restart.Bruno Fernandes' late penalty saved a point for United after Steven Bergwijn had given the hosts the lead.There were powerful images before a ball was kicked at the rainsoaked Tottenham Hotspur Stadium with players observing a minute's applause for those who have died during the coronavirus pandemic.Added poignancy was provided by the personalized shirts draped over seats of Tottenham season-ticket holders who had lost their lives over the last few months.Players also took a knee before play commenced in support of the Black Lives Matter movement which has grown in prominence since the death of Geroge Floyd.As well as taking a knee, Rashford raised his fist, in recognition of the symbol of black protest and liberation. Notably, Olympic medal winners John Carlos and Tommie Smith raised their fists on the podium at the 1968 Olympic Games in Mexico City during the US national anthem.The gesture has been adopted many times since, and many have raised their fists during the Black Lives Matter protests in the aftermath of Floyd's death.Individual names on the back of players' jerseys were also again replaced with the words 'Black Lives Matter.'READ: Rashford, the gifted Manchester United star who became a remarkable activist 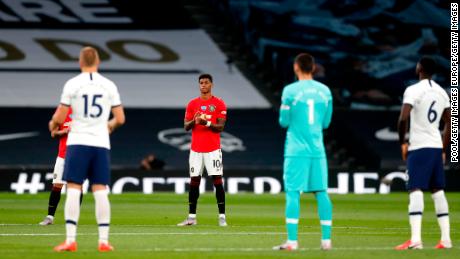 Tottenham's new stadium usually boasts a cacophonous atmosphere, but with no fans allowed in Premier League games for the time being it seemed to take Jose Mourinho's side a while to get used to the empty stands.United started on top as man-of-the-moment Rashford was denied the opening goal by the feet of Hugo Lloris.It was then left to Bergwijn to open the scoring for Tottenham after a wonderful run from the 22-year-old, though United keeper David de Gea arguably was at fault for the goal.Chances were few and far between in the second half as players still looked to be kicking off the rust after a long period away from the action.It was the introduction of Paul Pogba from the substitute bench that gave United the boost it needed and the Frenchman's clever play resulted in his side being rewarded a penalty after Eric Dier's clumsy challenge.Fernandes made no mistake from the penalty spot as he continues his impressive start to his Old Trafford career.The visitors almost had the chance to clinch all three points but VAR rightly overturned another penalty that was awarded to United in the closing stages after Fernandes went down. Those were nervy moments for Dier given he was initially adjudged to have fouled Fernandes. 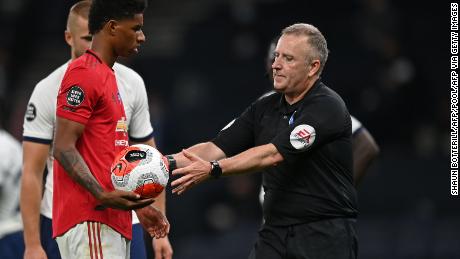 All eyes had been on Rashford before the game after quite a week for the talented forward.Very few have used their platform with such success, utilizing his extra spare time to focus on trying to help in his community.His campaign on school meals saw him dominate the news agenda and ensure some of the poorest families in England would get extra support over the summer holidays.The Manchester-born star has also raised millions in donations alongside food charity FareShare, launched a poetry competition for deaf children and learned sign language.It's work that's caught the eye of Rashford's club boss Ole Gunnar Solskjaer, who praised the talented youngster ahead of Friday's match."As his manager it's been fantastic to follow Marcus during the lockdown period," he told a virtual news conference Thursday."It's not just that he got the prime minister to change his mind but also what he's done over the last few months."He's chRead More – Source