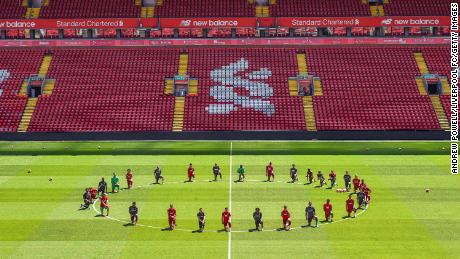 As pictures of the Liverpool players' gesture went viral on social media the head of Kick It Out, a leading UK organization that works to tackle discrimination in professional and grassroots football, urged every Premier League player to take a knee once the season restarts later this month.Floyd, a 46-year-old unarmed black man, died in Minneapolis on May 25 after being arrested by a white police officer who forcibly pinned him to the ground for several minutes by kneeling on his neck. His death has sparked widespread protests across the world in recent days.On Monday, Kick it Out chairman Sanjay Bhandari told The Guardian players must be free to protest when the current campaign resumes on June 17."I would like to encourage the players to protest if they want to but I would also like to encourage them to do it in a way that doesn't expose them to unnecessary sanction," Bhandari said. "If they could do that by taking a knee, well if every player did that it would be quite a powerful message. I would be interested to hear what the authorities thought of that, whether it would constitute a breach of the rules. To me that is about demonstrating solidarity."The Premier League did not immediately respond to CNN's request for comment.READ: Tiger Woods releases statement on George Floyd's death and protestsREAD: Lewis Hamilton and Michael Jordan speak out after George Floyd's deathWhile Liverpool's squad took a knee during training on Monday, Manchester United stars Paul Pogba and Marcus Rashford also posted messages of solidarity on social media.Bhandari's comments came on the same day that the German Football Federation (DFB) announced it was investigating protests made by Jadon Sancho, Achraf Hakimi, Weston McKennie and Marcus Thuram during Bundesliga matches over the weekend, a decision for which the federation has drawn criticism.Over the weekend, Borussia Dortmund's Sancho received a yellow card for lifting up his shirt to reveal the message "Justice for George Floyd" written underneath. Teammate Hakimi was not booked later in the game for making the same protest.Schalke's Weston McKennie wore an armband with the slogan "Justice for George," while Marcus Thuram took a knee after scoring for Borussia Monchengladbach."I hope there will be a degree of leniency shown by the German authorities," Bhandari said. "I'm not sure how you can sanction Marcus Thuram. I don't think he's done anything wrong. He's just taken a knee. I wonder if that's the thing I would encourage if players want to protest. "If you score a goal and take a knee could everyone do that? Not just the black players. The white players too — everyone. I would urge all the authorities and all the clubs to show a degree of understanding. This is almost above politics. This is about right and wrong. "This is someone who was killed on the streets by the police. This is about seeking justice for him and others like him. I don't see that as being political. That's human."The DFB said the yellow card given to Sancho had nothing to do with his message of solidarity. "Referee Daniel Siebert followed the laws of the game here, specifically Law 12 (Fouls and Misconduct), which states that a player will be booked for unsporting behaviour if they remove their shirt or cover their head with their shirt after celebrating a goal,' said the DFB in a statement.A spokesperson for FIFA, world football's governing body, says it "fully understands the depth of sentiment and concerns expressed by many footballers in light of the tragic circumstances of the George Floyd case" and has urged competition organizers to "use common sense" when considering possible sanctions for player protests."I think the players understand that if they take the shirt off they're going to get booked," Bhandari says. "Everything is contextual and in this context I think it would be very harsh for a punishment to go beyond that. I'm not sure how something like taking a knee could expose you."Every player should do it. It should be teams doing it. You saw the Erling Haaland celebration after the first game back where all the Borussia Dortmund plRead More – Source