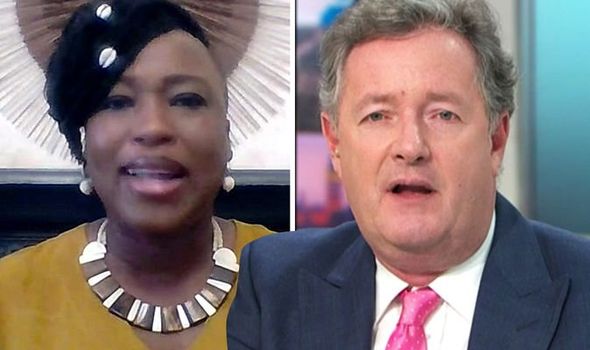 PIERS MORGAN argued that rap stars should stop using the N-word in their songs because it ends up being used hundreds of thousands of times every day on social media as a result.

Piers Morgan erupted on Good Morning Britain to question whether singers should stop using the N-word in song lyrics as people repeat it. The co-host explained if Swing Low, Sweet Chariot is to be banned, the N-word should be too. Dr Shola Mos-Shogbamimu explained there needs to a be balance on the freedom of speech.

Speaking to ITV’s Good Morning Britain, Dr Mos-Shogbamimu said: “We must achieve a balance for freedom of speech comes with responsibility.”

Mr Morgan asked: “If we’re going to ban Swing Low, Sweet Chariot, can we ban rap stars from peppering all their songs with the N-word?

“I’ve had an issue with that for a long time.

“There’s a staggering piece in the Washington Post a few years ago that said the N-word is used on social media 500,000 times a day, predominantly by young African-American mean in the US.

“Embracing it and using it as a sort of weapon themselves in the way it was used against them.

“But it comes back to people saying, ‘If black people are using it, why can’t I? ‘ which is obviously a ridiculous argument.”

The co-host added it “would be better” if rap stars stopped using the word in their songs.

It comes as Boris Johnson has said rugby fans should not be banned from singing Swing Low, Sweet Chariot as the sport’s governing body reviews the historical context of the song.

The Prime Minister said there should not be “any sort of prohibition on singing that song”, and he would “love” to hear the lyrics in full.

The Rugby Football Union has said the song is “sung by many who have no awareness of its origins or sensitivities”, and is reviewing its context amid the Black Lives Matter protests.

It is believed to have its roots in American slavery, with its credited author being Wallace Willis – a freed slave from 19th century Oklahoma.

The PM, a keen rugby fan, was asked about the song during a visit to a school in Hertfordshire.

“You go ‘Swing Low, Sweet Chariot, coming for to carry me home’, and then it all dies out. How does it go on? That’s my question.

“I certainly don’t think there should be any sort of prohibition on singing that song. My curiosity is why don’t people seem to know the rest of it – I’d love to hear the rest of it.”