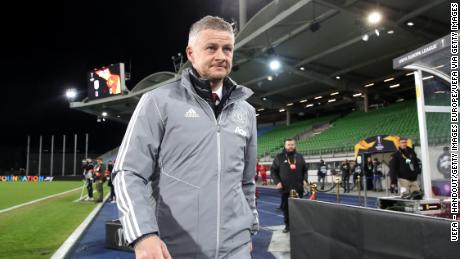 The Norweigan, who played for the club for 11 seasons, took over from Jose Mourinho as caretaker manager in December 2018, winning 14 of his first 19 games in charge, and signing a contract to take over on a permanent basis in March 2019. He has since endured an up-and-down time at the helm, with inconsistent results in the Premier League leaving United fifth in the table while also qualifying for the last 16 of the UEFA Europa League before the season was suspended because of the coronavirus pandemic. But while others might criticize Solskjaer for not immediately leading the club back to the heights it reached under Sir Alex Ferguson, Schmeichel thinks he is making the most of the resources at his disposal. "I think he's done a tremendous job. I think he's far exceeded my expectations on what could be done in a relatively short period of time, it has to be said," Schmeichel told CNN Sport's Amanda Davies in an Instagram Live chat. "Basically what he's taken over is six years of too many different directions. He's taken over players that were with Sir Alex (Ferguson), he's taken over players that were with (David) Moyes and Louis Van Gaal and then (Jose) Mourinho. "And all of them are different. They're different in their approach, their different in the players they like. So he's not really had an opportunity to build what he wants but he has. I think he has been helped by circumstances for absolutely sure but he's given opportunities to players who you always thought that they were good, they could do the job. But because of the lack of patience or understanding of the players ability."READ: Paulo Dybala: 'It is not only people of color that should be fighting racism. We all have to'The progress Solskjaer has overseen is displayed in the ever-improving displays of midfielder Fred. The Brazilian international had become a figure of derision following a string of underwhelming performances having arrived from Shakhtar Donetsk for a reported fee of $59.8m (£47m) in 2018.But his development under Solskjaer is evidence of the positive impact the manager has had. "Fred has been, for me, absolutely instrumental in how well the club has done this season," Schmeichel said. "He was always perfect for the club but he's now been given playing time and the more time he's been given, the more confidence he's gained and for me, he's been one of the great stories this season at Manchester United. "Of course it's down to Fred but it's down to Ole for giving him that confidence. I like that. I like the way he's kind of introduced players that were already there but are now in the first team and are now playing well. "He's also brought all these values in. The players now know them. If you don't share our values, there's no place for you here. So you have to live up to his values. And he's bringing in his own culture and you can see it and it's there and it's brilliant."Read More – Source