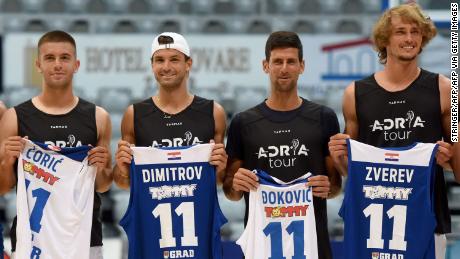 Instead, the top-ranked Serb is involved in a damage limitation exercise after his exhibition tour in the Balkans, intended to be an uplifting moment during the sport's hiatus because of the coronavirus pandemic, was cancelled when Djokovic, his wife Jelena, three other players, three coaches and one player's pregnant wife tested positive for the virus. Unlike other exhibition events during the pandemic, there was limited social distancing on the Adria Tour, which was played to crowded stadiums, with players hugging and high-fiving each other, playing basketball and dancing together. "He hasn't had a good lockdown," British sports marketing expert Tim Crow put it bluntly in a phone interview with CNN Sport.

When Djokovic announced in May he would host the Adria Tour, it seemed like tennis was slowly emerging from the shutdown, which had led to the first cancellation of Wimbledon since World War II.The Adria Tour, which was scheduled to be played in four cities from June 13 through July 5, had attracted three-time grand slam finalist Dominic Thiem of Austria, world No. 7 Alexander Zverev of Germany and three-time major semifinalist Grigor Dimitrov of Bulgaria, among others. Djokovic's 24-year-old brother, Djordje, was named tournament director.Speaking at a launch press conference on May 27, Djokovic said he was "extremely happy" to announce the series, organized by him and his family. He stressed "absolutely all income" from it would be going to humanitarian organizations, before proudly announcing that all the players would be playing for free.He also said the tour would "follow to and adhere to" the local regulations and rules. READ: Djokovic tests positive for coronavirus

When Djokovic played his first match against fellow Serb Viktor Troicki on the afternoon of Saturday June 13 in Belgrade, some 4,000 spectators had filled the stadium close to the Danube river to capacity, with few fans wearing masks. The players, good friends, hugged after Djokovic won in straight sets.They also shook hands with the umpire, while ball kids handed them their towels. They took selfies with fans afterwards, and signed autographs.Serbia and Croatia, neither of which experienced major virus outbreaks, had recently lifted many lockdown measures. But the Serbian government was still asking people to remain one meter apart. The lack of social distancing left many stunned."It is as if Coronavirus has passed?" wrote former British No. 1 Greg Rusedski on Twitter two days later. "How was this managed and why no concern for public social distancing and face masks. I know the figures in Serbia but why are they able to do this?"The seemingly carefree nature of the event, which came a few days after a 20,000-strong crowd attended a soccer match in Belgrade, also surprised Crow, a former chief executive of London-based sports marketing agency Synergy."It was a screw-up," he said. "As soon as you turned the TV on, you think, 'Hang on a second, what's going on here?' And unfortunately, we all know what happened."Also during that weekend, players including Djokovic, Thiem, Zverev and Dimitrov were filmed dancing in a packed Belgrade nightclub.

The limited social distancing at the Adria Tour was in sharp contrast to other exhibition events during the pandemic in the US, Germany, Britain and France, which were all held behind closed doors.When Patrick Mouratoglou, Serena Williams' long-time coach, wanted to host an event at his academy in the south of France during the lockdown, he reached out to the government. It sent him a long list of protocols, which he has implemented in his Ultimate Tennis Showdown series. "I wanted to make sure to do it in a way where no one is at risk," Mouratoglou told CNN Sport in a phone interview on Friday. These include all players being tested the day before each weekend's matches, no fans, no handshakes or ball-sharing between players, ball kids wearing gloves and masks and ample distance between every seat in the players' box. Speaking at the ceremonial opening of the Adria Tour the day before his match against Troicki, Djokovic defended the limited social distancing of the crowd.He emphasized Serbia had "better numbers" compared with other countries. According to the Johns Hopkins Coronavirus Resource Center, Serbia has had 13,372 confirmed cases, including 264 deaths. Neighboring Croatia had registered 2,483 cases, including 107 deaths. "You can also criticize us and say this is maybe dangerous but it's not up to me to make calls about what is right and wrong for health," Djokovic added. "We are doing what the Serbian government is telling us." 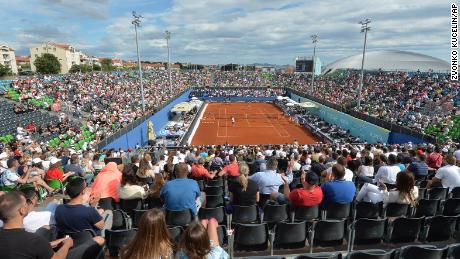 The next leg of the Adria Tour on June 20-21 once again attracted thousands of spectators, including Croatia Prime Minister Andrej Plenković, who briefly met Djokovic. Because Croatia had eased its lockdown measures before the event, players and fans didn't have to stick to social distancing rules. Then came the bombshell announcement by Dimitrov on Sunday June 21 that he had tested positive for coronavirus. The organizers swiftly canceled the entire series, while most of the other players were tested the same night. Then, on Monday, Croatia's Borna Coric confirmed he too had tested positive, while Zverev, former US Open winner Marin Cilic of Croatia and Russia's Andrey Rublev all tested negative but promised to self-isolate for 14 days as a precaution.

Troicki revealed he had tested positive soon after and then, on Tuesday, Djokovic confirmed that he, too, and his wife, Jelena, had done the same. Troicki's pregnant wife, Djokovic's fitness coach and Dimitrov's coach were also positive. Then on Friday, Djokovic's co-coach, Wimbledon winner Goran Ivanisevic, revealed he also tested positive. Djokovic's mother Dijana told Serbian newspaper Blic that although the world No. 1 is positive it "doesn't mean he is ill.""He is a young man and can bear it easier," she said. 'I also think this virus is close to the end so this seems just like a second wave of Corona, which is not as strong as in the beginning.""It is horrible, too horrible, what they write (international media), but we are used to it. It is like they couldn't wait for it (bad news) to happen. It is obvious that they have something against Novak."READ: Tennis event organized by Djokovic under fire

The condemnation was quick, with Australian player Nick Kyrgios labeling it a "boneheaded decision" to go ahead with the event. Britain's Andy Murray said that after seeing some of the pictures of the post-event party in Belgrade and of kids' day it was "not surprising how many people had tested positive."Djokovic, who went from Zadar to Belgrade before being tested, said he was "deeply sorry our tournament had caused harm." Stressing that everything had been done with good intentions, he said he had believed the tournament met all the protocols but that "we were wrong and it was too soon."The blame game was quickly in full flow, with Djokovic's father Srdjan pointing the finger at Dimitrov."Why did this happen? It is because the man (Dimitrov) has probably arrived ill from who knows where andRead More – Source