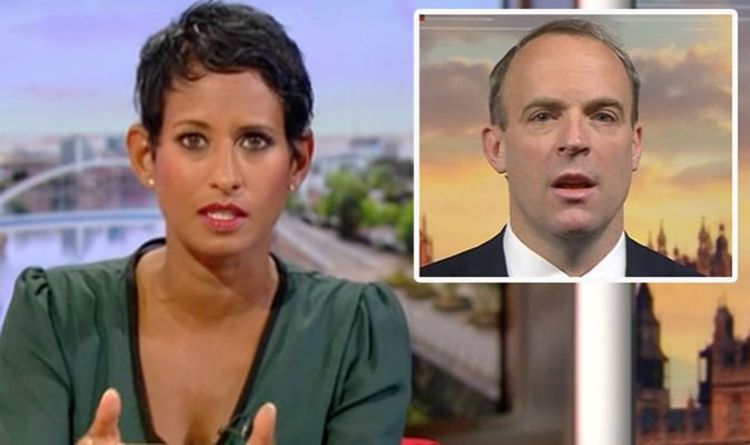 NAGA MUNCHETTY slammed Foreign Secretary Dominic Raab on Thursday’s edition of BBC Breakfast as the host discussed the government’s stance on forming an airbridge with France to try and relax measures on the 14-day quarantine rule.

Naga Munchetty, 45, was on hand to host BBC Breakfast today alongside co-star Charlie Stayt, 57, and the presenters discussed the latest headlines from across the globe, none more poignant than the recent developments emerging over the coronavirus crisis. To get a greater understanding on the matter, the pair welcomed Foreign Secretary Dominic Raab onto the BBC news show. With French President Emmanuel Macron, 42, urging the UK to reach a deal with their European neighbour to allow travel between the two countries without a 14-day quarantine in place, the government minister explained the issue in more detail. However, when he seemed to glance over what his interviewer was asking, she took him to task.

In his first visit to the UK and the first foreign minister to travel in the midst of the ongoing health care crisis, Macron will meet Prime Minister Boris Johnson, 55, later today.

The French President is making the journey to mark the 80th anniversary of the wartime Resistance where Charles de Gaulle’s BBC broadcast to occupied France after the 1940 Nazi invasion.

However, it is expected the politician will ask his British counterpart to relax travel regulations which are now in place whereby UK travellers will have to quarantine for 14-days when they return from abroad.

This action was announced by Home Secretary Priti Patel, 48, last month with the rules coming into force from the start of June.

As Munchetty fiercely grilled her interviewee on how the government was planning to respond to the request, the host end up slamming the guest as she wanted a clear and succinct answer.

“Looking at this 14-day quarantine rule, what position is the UK going to be coming from in the discussion?” the host asked at the beginning of the interview.

Raab replied of Macrons visit: “It really highlights, for all the challenges we have in our relationship with France, actually we stand shoulder-to-shoulder when we really need each other.

“On quarantine, of course, well look at all of those issues with the French. The key thing for us is, yes open up our airports and our air traffic as soon as we can safely and responsibly do so.

“What we know is as we come out of lockdown, European and Asian countries are going through the same thing, is there is a risk of reinfection from abroad.”

The Foreign Secretary went on to explain there are second waves developing in several European and Asian countries, which is causing a big problem for relaxing travel measures.

“We just want to be very careful, yes to open up, but to do so when its safe and responsible. Well work through all that with our French friends,” Raab added.

However, the host didnt seem too pleased with the reply as she said: “Just to go back to the question.

“What is the UKs position? Is Boris Johnson going to sit down with Emmanuel Macron and say, We want now want to drop this 14-day quarantine rule? We want our people when they decide to travel to France to have an air bridge or be able to have access to France.”

As Raab tried to give a reply, Munchetty interjected as she hit back: “But you must have a position this morning. There must be an opening gambit, mustnt there?

The Foreign Secretary told the presenter: “Were going to be looking into this, how it can be done safely and responsibly.

“Of course, there is a risk of legal challenge if you just open up for one country and not others, so we want to make sure we open up.

“And this is the point of our starting point, as soon as we can safely and responsibly do so, obviously France is very close geographically and politically our partner.”

Raab continued to explain the details of the quarantine rules and easing them were “complex”, adding the UK will “open up” when it is safe and responsible to do so.

Earlier this week, EasyJet was the first airline company to resume their flight schedule, with a plane taking off from Gatwick to the destination Glasgow.

The Foreign Office is still stating travel abroad should only be taken if it is absolutely essential, the same rule which applies for public transport.

Latest figures with regards to the coronavirus show 42,153 have now died as of 5pm Wednesday as a result of COVID-19, an increase of 184 from 24 hours before.