Messi milestone in first game back 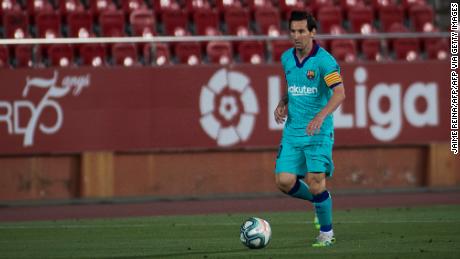 Messi's goal in second-half injury time at relegation threatened Mallorca — with his right foot, not favored left — meant the Argentinian became the first player to score at least 20 goals in 12 straight La Liga seasons. Follow @cnnsport He also produced two assists in the 4-0 victory that sent Barcelona five points clear of arch-rival Real Madrid atop the table. Messi and Barcelona hadn't played for more than three months amid the coronavirus pandemic, with Spain one of the world's hardest hit countries. When La Liga resumed Thursday, matches were contested behind closed doors, just like in Germany's Bundesliga, which restarted last month. But that didn't stop a man wearing a Messi Argentina jersey from getting onto the pitch Saturday to try to get a photo with the record six-time Ballon d'Or winner. He was intercepted by security and escorted away. Arturo Vidal opened the scoring for Barcelona in the second minute after converting Jordi Alba's perfect cross and Messi put through Alba in the 79th. The other Barcelona goal came from Martin Braithwaite, who was signed as an emergency striker from modest Leganes in February after longterm injuries to Ousmane Dembele and Luis Suarez — who returned Saturday and assisted on Messi's effort. Brathwaite latched on to a ball in the box and drilled his shot into the roof of the net in the 37th minute for his first Barcelona goal.

"I've been waiting for this a long time," Braithwaite told Barcelona TV. "It's amazing to score my first goal and most importantly it was really important to start like we did today. "I've been working a lot in this breRead More – Source