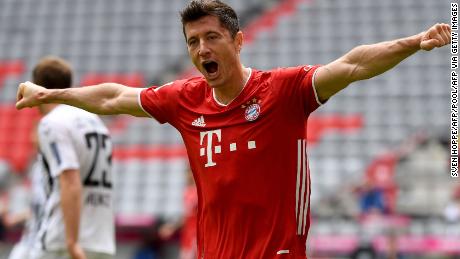 The Polish international helped Bayern, already crowned champion for the eighth straight season, to a 3-1 victory in its penultimate match of the league campaign.Lewandowski has grabbed 33 goals in just 30 Bundesliga matches this campaign, both his latest coming in the first half at the Allianz Arena as Bayern secured a 3-1 advantage at the break. There was no further scoring in the second half.Gabon star Aubameyang scored 31 in the 2016/17 season for Borussia Dortmund before he moved to his current club Arsenal in the English Premier League.With just one round of matches remaining, Lewandowski is still short of the remarkable all-time record of 40 by the legendary Bayern Munich and German striker Gerd Mueller in the 1971-72 season.READ: Lewandowski double in Bayern routBut with 48 goals in 41 games in all competitions this season, Lewandowski has plenty of opportunities to improve his overall tally as Bayern is facing Bayer Leverkusen in the German Cup final on July 4 before continuing its bid to win the Champions League which resumes in August.Lewandowski is the top scorer in Europe's elite competition this season with 11 goals in six games, his latest against Chelsea in the first leg of the last 16 clash which Bayern won 3-0 at Stamford Bridge back in February.

Meanwhile, the Bundesliga's other most prolific scorers went head-to-head as Timo Werner's RB Leipzig hosted Erling Braut Haaland's Borussia Dortmund.Werner, who is playing his final two matches for Leipzig before joining Chelsea, drew blank but the Norwegian prodigy Haaland scored in either half to help Dortmund to a 2-0 away victory which secures second place in the standings behind Bayern.The 19-year-old Haaland, who has also been linked with a number of Europe's biggest clubs, has scored 13 goals in 14 games since joining Dortmund from RB Salzburg last December. 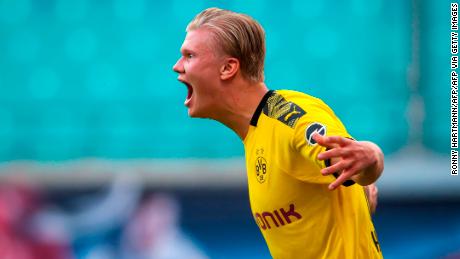 Werner stays on 26 for the season in the Bundesliga, second only to Lewandowski.Consolation for Leipzig, which is through to the last eight of the Champions League, was the 2-0 defeat for Bayer Leverkusen at Hertha Berlin.It has left Leverkusen three points adrift of Leipzig in the battle for automatic qualifying spots for next season's Champions League with just one round remaining and a vastly inferior goal difference.Elsewhere, it's looking bleak for Werder Bremen, with a 3-1 defeat at Mainz leaving the northern side second bottom and two points adrift of Fortuna Dusseldorf who are in the relegation playoff spot.

Meanwhile in the English Premier League, Aubameyang's Arsenal suffered a second chastening defeat in four days as Neal Maupay scored deep into injury time to give Brighton a 2-1 victory over the Gunners.Nicolas Pepe put Mikel Arteta's faltering side ahead on the 68th minute at the Amex Stadium with a stunning strike, but home defender Lewis Dunk capitalized on suspRead More – Source