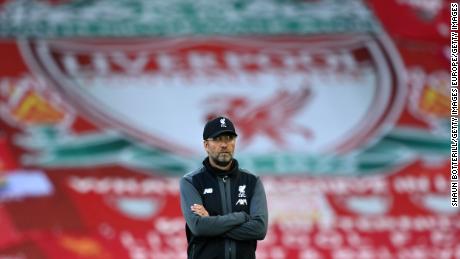 The German, fresh from celebrating the long-awaited achievement, knows Manchester City's benchmark of 100-points is within reach but concedes the congested fixture list makes reaching it particularly challenging. The Reds have amassed 86 points so far and now have seven games left in which to break the record — all to be played in the space of 25 days. "It's incredibly difficult, so for sure we have to make changes and we need to be lucky with everything," Klopp told CNN Sport. "These boys will not stop throwing their soul on the pitch, 100%. They see the chance for a points record."For me as a coach, my job is to make sure that we get through that period without massive problems." READ: How Jurgen Klopp turned Liverpool into title winners

Liverpool fans, relieved that the agonizing wait is finally over, should be excited with what's to come next for their club, according to Klopp.The 53-year-old manager says he wants to make Anfield a fortress for years to come and build upon what is already one of the best teams to ever play in the division. Liverpool is now just one title win away with pulling level with fierce rival Manchester United on 20 league trophies but Klopp insists the focus has never been about other clubs. "For me, it's important that we improve and for me, it's important that we show the consistency still and for me, it's important that nobody wants to play us," he said."I want to create atmospheres together with our supporters which you can tell your grandkids [about]. I want to see a specific way of football which is emotional, which is fast, which is full of action."If you stay humble and be ready to improve then we have a chance to win more silverware but only a chance because the other teams are still there."READ: Liverpool wins English Premier League for the first time in club's history

Klopp and the Liverpool squad celebrated their achievement together as they watched Chelsea beat Manchester City — thereby handing them the trophy — at a golf resort in the city. The final whistle was greeted by jubilant scenes as players and coaches danced way into the early hours of the morning. An emotional Klopp, unable to get through some early interviews without crying, confirmed all those present were in the same social bubble and said it was important to share such a momentous occasion. "I think we all would have regretted it if in the future it was like 'I sat there alone in my room' and 'I sat there watching on television,'" he added. "It was exceptional for our lives and so I thought it makes sense that we do it together." Read More – Source