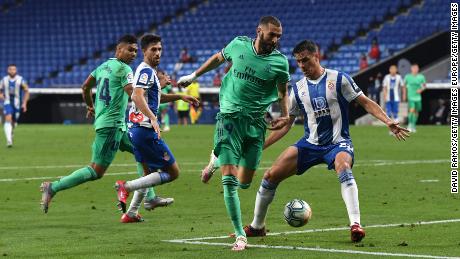 This time it was Karim Benzema providing the magical assist, rather than being on the end of it.The Real Madrid striker's sublime backheel — caught on the half-volley and steered through the legs of Espanyol defender Bernardo — found the onrushing Casemiro to score the only goal in a tightly contested match.With Barcelona dropping points for the second time in three games, it could prove to be the decisive moment in La Liga's title race as Real moved two points clear at the top.But when it comes to providing otherworldly assists, Bezema has learned from the best in the business.In a match against Deportivo La Coruña in 2010, Spanish maestro Guti — who was subsequently rumored to have eyes in the back of his head — set up Benzema with a prescient backheel.It is widely regarded as the greatest assist of all time … but not anymore, at least for Real coach Zinedine Zidane.READ: Barcelona's title hopes dim after a draw at Celta VigoREAD: Arjen Robben to make comeback with first club Groningen"I think this one is, Karim's," the Frenchman told reporters after the match. "It's the most recent one. The good thing is it's a team move; Sergio with his head, Karim's control and backheel, and then Casemiro knows that Karim can invent something. It's a beautiful team goal."We know Karim is an impressive player and he shows it in every game. A player improves all the time and that's what's happening with Karim. He's at a good age, at around 32 or 33 if you look after yourself as he does, they're your best years of football."It doesn't surprise me. He is a player who invents things," he told AS. "And then Casemiro is there. It can be one of the plays of the championship."Benzema' assist drew praise from Guti himself, who tweeted: "Magic, friend. Brutal."After the match, Casemiro insisted all credit for his goal should go to Benzema."It would be a bit unfair to talk about my goal after what Karim did,&qRead More – Source