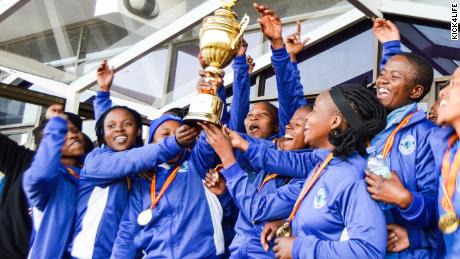 It was her love of the sport that first drew her to Kick4Life, a charity founded in her native Lesotho by British brothers Steve and Pete Fleming in 2005.Kick4Life offers support on a variety of health, education and gender programs in Lesotho, an enclaved country within South Africa. One of these programs is the Girls United initiative, which supports vulnerable girls and women facing gender-based violence, using football as a means to engage and empower them."I went through some abuse that almost ended my life," Ramokoatsi tells CNN Sport. "I was raped and I was not able to talk about it. It happened way back in high school, but meeting some of the trained people at Kick4Lfe, I was able to talk about it and able to heal. "I was not healed at all until I got here. I always tell people that if it wasn't for Kick4Life, I couldn't have been here today or I wouldn't have been alive. It's the most important thing that ever happened to me as a person."In the 10 years since Ramokoatsi joined the charity, she has gone on to become the head coach of Kick4Life FC women's team.Last week, Kick4Life FC said from next season it will become the first top-flight team in the world to give its men's and women's sides equal budgets.Kick4Life FC's men's team won promotion to Lesotho's top division in 2014, while the women were founding members of the Lesotho Super League and in 2018, with Ramokoatsi at the helm, secured the club's first major trophy by winning the Women's Super League Cup."We've seen that women's team be incredibly powerful as role models and a lot of the players are involved in running Girls United," Kick4Life co-founder Steve Fleming tells CNN."[They're] using football as a means to engage and inspire and empower women, and also change attitudes of men as well. Just by seeing women playing football is starting to break down perceptions about the role of women in society."Fleming says Kick4Life also runs educational programs for men to try and change "archaic" attitudes towards women in society.An assessment by the United Nations Population Fund (UNFPA) in April found that there was an "unusually high" number of sexual assaults in Lesotho following the start of coronavirus lockdown. Similar increases have been recorded around the world since the pandemic forced most countries into quarantine. "As a club dedicated to social change we can no longer justify being complicit in a global sports industry that puts opportunities for men ahead of women," Fleming said. "And we believe that by changing things on the football pitch, we can more effectively pursue gender equality in all areas of life — at home, in school, in relationships and in the workplace."READ: Judge dismisses US women's national soccer team's equal pay claims 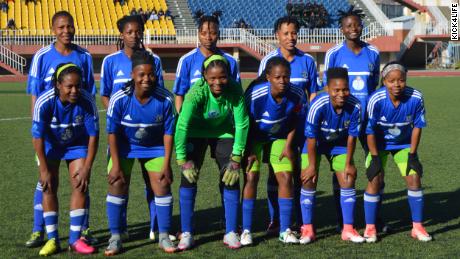 While it was football that first brought Ramokoatsi to Kick4Life, she says the charity has given her a lot more than success on the pitch. Though initially not interested in the educational programs Kick4Life had to offer, she says they have helped her grow as person."When I was in high school, I was dealing with my auntie who was diagnosed with HIV," she recalls. "But I was not supporting her. Instead, I was discriminating and stigmatizing her because of the virus. After being educated, I felt bad about myself and by then my auntie had died of HIV. "I got to see that what I was doing was bad. Instead of stigmatizing and discriminating her, I should have supported her. I made it about myself that I will support every person living with HIV because I did not do that for my auntie."Ramokoatsi was part of a small group of players that founded Kick4Life FC's women's team in 2010. Back then, there were only seven of them that played for the club and competed in the local league around Lesotho's capital, Maseru.While the team has grown — she says she no longer has to be both a player and a coach — and achieved considerable success on the pitch, Ramokoatsi says the growth of her players as people is what brings her the most pride and joy."Our players are not just players or role models on the field, but they are also role models off the field," she says. "Some of them are coaches of the life skills programs that we have and then some of them are partaking in the work that Kick4Life is doing."When the excel on the field and excel off the field, it is always a pleasure for me. I'm always proud of them."Kick4Life FC's new gender equal budgets will come into place for the 2020/2021 season and Fleming hopes this will translate into success on the pitch.After finishing as runners-up three times, his dream is that the women's side will be crowned champions of the Super League. For the men's team, he hopes they can one day win the league and qualify for the Africa's prestigious CAF Champions League.READ: Australia&Read More – Source