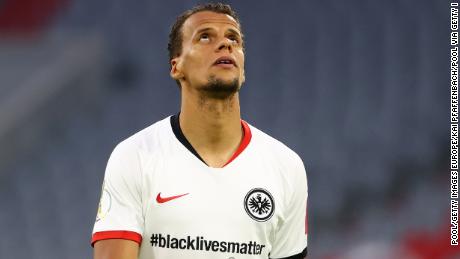 Frankfurt's sporting director Fredi Bobic said the entire team wanted to show it was "together against all forms of racism" amid widespread protests around the world, sparked by the death of George Floyd. The team's regular shirt sponsor had the hashtag #blacklivesmatter emblazoned across the front, whilst Bayern players once again wore t-shirts supporting the cause during the warmup. "Eintracht Frankfurt's history is shaped by open-mindedness and international understanding. These attributes are firmly anchored in the Eintracht DNA," said Frankfurt board member Axel Hellmann."Racism, xenophobia, antisemitism and homophobia have no place within the Eintracht family and must have no place in a liberal society." READ: Kimmich says Bayern Munich is planning to join George Floyd protestsREAD: Premier League players urged to take a knee in protest at George Floyd's deathIn addition to its warmup jerseys, Bayern displayed its #RedsAgainstRacism initiative on advertising boards around the stadium and on corner flags. The host eventually won the game 2-1 to reach the German Cup final for the third consecutive year."This evening at the Allianz Arena, FC Bayern will be making another clear statement against all forms of racism, discrimination, intolerance and violence," read a post on its official Twitter account. Bayern's players also wore black armbands in a match against Read More – Source