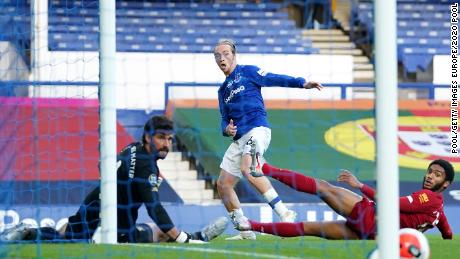 It was not the result that Jurgen Klopp's men wanted on their return to action after a three-month hiatus, but with a 23-point lead over Manchester City, celebrations will not be long delayed.Everton, improved under new manager Carlo Ancelotti, came closest to securing victory with Tom Davies seeing his late effort roll against a post and Brazilian striker Richarlison forcing a smart save from Liverpool goalkeeper Alisson Becker.Despite concerns over fans congregating near the stadium with Liverpool's Anfield less than a mile away, permission was given for the match to go ahead at Goodison. But in an empty stadium, the usually fevered atmosphere of the derby was lacking.Also lacking was clear-cut chances for either side, with Liverpool, leaving a not fully fit Mo Salah on the bench, rarely troubling home goalkeeper Jordan Pickford.Joel Matip should have done better from a Trent Alexander-Arnold free kick in the first half and Liverpool started the second half strongly with Roberto Firmino and Naby Keita combining well to set up a chance.But Everton survived the pressure and came very close to causing an upset in the last few minutes as a clever flick from Dominic Calvert-Lewin was kept out by Alisson with a first-time attempt from Davies striking the woodwork and away.The draw leaves Liverpool unbeaten in the last 22 Merseyside derbies, but still five points from guaranteeing the coveted English Premier League crown.The Liverpool manager said his team didn't create enough chances for the amount of time it possessed the ball."Most of the time we were dominant but then they had the biggest chance out of the blue, we were lucky in that moment," Klopp said."Both teams showed it was a derby, even without a crowd," Klopp said. 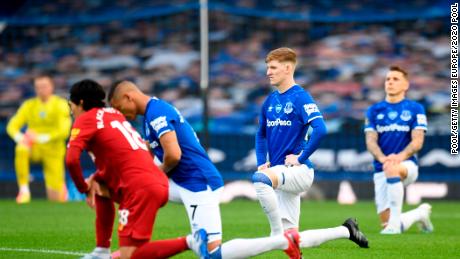 Before the match, both teams took the knee in support of the Black Lives Matter movement and stood for a minute's silence in honor of those who have died in the Covid-19 pandemic.READ: 30 years of dreaming: Liverpool's long wait for the English titleREAD: Champions League final 2005: 'Something unreal happened'

Earlier on Sunday, Chelsea cemented its grip on fourth place with a 2-1 win at relegation-threatened Aston Villa.Kortney Hause put Villa ahead against the run of play just before halftime, but after the break it continued to be one-way traffic as Chelsea dominated possession without carving out a string of chances.Manager Frank Lampard sent on US international Christian Pulisic in a bid to spark his attack and it paid almost immediate dividends as he connected with a Cesar Azpilicueta cross to half-volley an equalizer in the 60th minute.The winner came just two minutes later as Olivier Giroud was allowed time to turn in the penalty box and his deflected shot beat Orjan Nyland in the Villa goal. 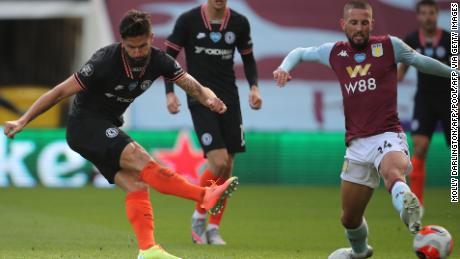 Villa had a late chance to level as Jota pulled his shot wide, but Dean Smith's team was well beaten and remains second bottom in the standings.The victory completed a good week for Chelsea, which has strengthened its squad with the acquisitioRead More – Source