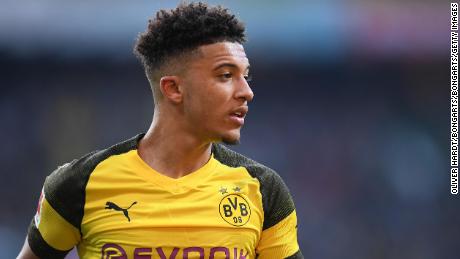 When Wonder Woman smashed glass ceilings and box office sales worldwide.When the unmistakable sound of Despacito became the most streamed song of all time.Or perhaps when, at an eye-watering $263 million, the prodigious Neymar Jr. became the most expensive footballer on the planet.It marked the zenith of football's age of abundance and promised to usher in a new era of super-spending.But that was then. This is now. A pandemic has changed the game.Vital cashflows are drying up. Purse strings are being tightened. Cost-cutting is rapidly becoming king.Football has pressed the pause button and in doing so is bracing itself for an age of austerity. "It's a wake-up call […] A big chance for football to get a little bit back to reality," Lutz Pfannenstiel, who is sporting director at Bundesliga club Fortuna Düsseldorf, told CNN Sport.READ: In eerie silence, Bayern closes in on Bundesliga title

Before the pandemic struck, football's upward spending curve had shown few signs of abating.Last summer, clubs in Europe's "Big Five" leagues — England, Germany, Spain, Italy and France — spent a record €5.5 billion, according to analysis from Deloitte's Sports Business Group — up €900 million compared with the same period in 2018.In England's Premier League alone, 11 of the 20 clubs smashed their own transfer records whilst spending in Spain's La Liga broke the $1 billion mark for the first time.This summer promised to be no different.Big money moves had been earmarked for some of European football's hottest properties — with frenzied speculation surrounding the futures of Borussia Dortmund's wonderkid winger Jadon Sancho, Manchester United's enigmatic midfielder Paul Pogba and Napoli's commanding defender Kalidou Koulibaly to name but a few.Although newly crowned French champions Paris Saint-Germain have laid down the gauntlet with the permanent signing of Argentine striker Mauro Icardi for a reported fee of $67 million, the Covid-19 crisis has thrown everything up in the air.With leagues around the world now scrapping to salvage what they can of the 2019-20 season, the latest transfer window, which opens on June 10, has a very different feel to it.Leading Dutch team Ajax is better placed than most clubs given its business model is primarily based on a youth development program that has produced a series of world class players which have delivered a steady income stream."I'm sure there will be reasoning with new contracts, with salaries, with agent fees and also with costs in general for a club […] I'm sure we will get a good amount of money, even in the Corona times," Ajax CEO Edwin van der Sar recently told CNN Sport's Patrick Snell.That may, though, be wishful thinking.According to analysis by the consultancy KPMG, it estimates that if domestic seasons can be completed "behind closed doors," the value of players will fall by €6.6 billion ($7.23 billion). If seasons across the continent are called off altogether, that figure will reach a staggering €10 billion ($10.95 billion).The game's seemingly impenetrable spending bubble is heading towards bursting point.READ: Liverpool's agonizing wait for English football's biggest prize

Yet, even at a time of crisis, one man's loss can be another man's gain.In April, Manchester United manager Ole Gunnar Solskjaer expressed his belief that United could "exploit" those clubs severely impacted financially by the pandemic. Although his comments drew criticism from some quarters, football finance expert, Kieran Maguire, believes the Norwegian was merely stating an economic reality."The gap between rich and poor will grow because the bigger clubs tend to have stronger balance sheets and more cash in the bank," Maguire explains. "Say you've got a player who is of a very high quality — we would normally be looking to buy him for £40 to £50 million ($48.8-$61 million). Tell you what we'll offer you £20 million ($24.4 million) today cash and the selling club will very reluctantly go along with that offer because it will be fighting for its existence."It's a view shared by sports lawyer, Daniel Geey, who believes the nature of negotiations will become more varied and nuanced."The types of transactions that can give clubs the most flexibility are going to be the most attractive at the moment […] loan to buys or longer loans over maybe one or two seasons and with break clauses."With flexibility, patience and caution poised to become the dominant buzzwords in football's lexicon, the scrutiny on player recruitment will be greater than ever."(Clubs) will think twice or even three times before just signing somebody […] If you're not 100% you won't sign a player — you'd rather wait," says Pfannenstiel.READ: Inside the 'impossible' Champions League final win