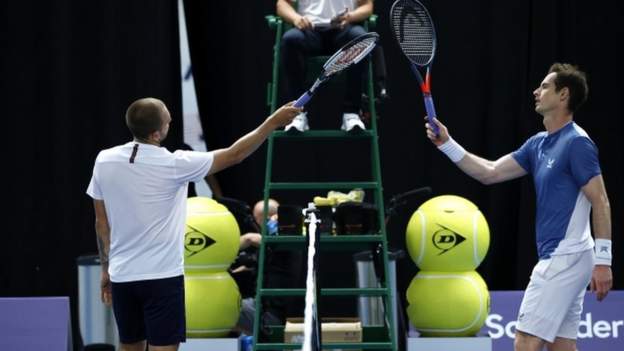 It was another famous son of the Midlands who wrote, “Uneasy lies the head that wears a crown,” and Solihulls finest, Dan Evans, well knows the feeling. Even as he confirmed his status at the top of the British rankings with a 1-6, 6-3, 10-8 win over the resurgent Andy Murray on Saturday, Dan Evans understood that Kyle Edmund would be plotting to disturb his reign in the Battle of the Brits final on Sunday.

Edmund (now, theres a Shakespearean name of intrigue for you) is 16 points adrift of the world No 28 and second to him nationally. And he needed all his fighting qualities to beat Cam Norrie 6-7, 6-4, 10-8 in the second semi-final, remarking later: “Evo is the British No 1 and its going to be tough. Im finding ways – perhaps not the best executed, but getting there.” Edmund sealed the tie-break with two cracking backhands, his newfound weapon after three months in lockdown.

In the first semi-final of the tournament organised by Murrays brother, Jamie, to raise money for the NHS, neither Evans nor Murray would accept favourite status in their first ever competitive match. But Murray was expected to prevail, even though he was returning from seven months out with a potpourri of old and new injuries.

Dan Evans, make no mistake, beat a very good Murray, not the patched-up, hobbling version who had struggled through only 30 matches in three years. The 33-year-old (three years older than Evans) will rest then head for the Citi Open in Washington in August to prepare for the US Open, which is scheduled to start on 31 August. Evans intends to join him.

Murray is never happy in defeat but was pleased enough with his level and his weeks work, despite having also lost to Edmund in the round robin. “Dan plays a little bit differently to Kyle,” he said, “but when youre playing at the highest level, you have to be able to adapt. Its got me a lot of wins over the years.

“Playing matches on the Tour is very different to this, with coaches on court. Also we played behind closed doors and its maybe good to get used to that. There are things in a slam or a Tour event Id certainly do differently out there. But from a physical perspective, I did really well.”

They played long stretches of excellent tennis. Dan Evans, who is having the best season of his career – albeit one interrupted by a global health crisis – showed the sort of intensity that carried him to the third round at Wimbledon and Flushing Meadows last year.

“I didnt do much wrong. Im immensely proud to have been on the court with Andy in a semi-final. I was very happy with the way I played, the way I moved. I was pretty resilient. At the start, he was flawless, overpowered me. His serve has been amazing, back to normal since his hip surgery. And he can work on the other parts of his game. He was playing big tennis on the big points. Thats why hes been as good as he has. I just hung in there.”

Murray started like Mike Tyson after being denied access to a nightclub, with a pair of aces and a couple of blistering forehands. Within a quarter of an hour he was 3-0 up with the engine revving. Half an hour later, he had blitzed the first set.

This was old-fashioned statement tennis; according to Jamie Delgado, who was fielding stray balls at the back of the court, it was “the best set of tennis Ive seen him play for a long time”.

Murray, who spent six hours and eight minutes in three round-robin matches, had Friday off to rest his aching body, while Evans was finishing off a stint of four hours and 21 minutes for a hat-trick of solid singles wins.

On Tour, Rafael Nadal and Novak Djokovic are the quickest at breaking back (and certainly the world No 1 will need those powers of recovery to come through his current difficulties), but Evans dug deep to go 3-0 up at the start of the second. He whispered to his coach, Mark Hilton: “I need another break.” Whether Murray heard him or not, he held twice from 0-40– including four set points – for 3-5, forcing Evans to serve out.

In the match tie-breaker, Murray, chuntering to himself and breathing heavily, went 4-1 up but had to save one of two match points. Evans struck his trademark single-handed backhand into an untended corner, clipping the net, and said later: “Bit lucky, that.” Luck played very little part in the result, though.

In the second semi-final, Edmund found Norries variation of serve and groundstrokes difficult to figure in the first set but he pounced on chances in the second to force the match tie-break, which has provided several knife-edge finishes all week.

“I felt he was a bit happier with his game than I was,” Edmund said. “Had to dig deep, get my energy up. The close games are key when you look back. My backhand winners at 8-all [in the tie-break] was not too precise but it came off – also for match point. Had to work for it.”