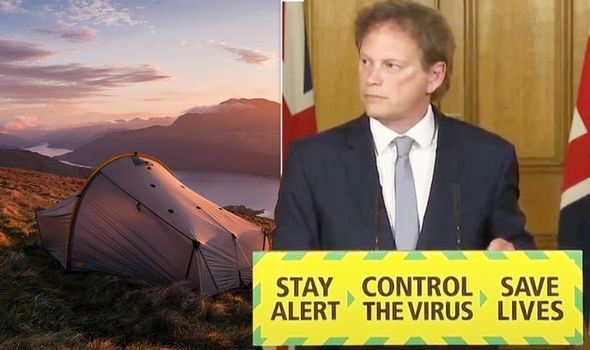 CARAVAN PARKS and campsites have been inundated so far this year with bookings after the UK lockdown was eased back in May. And now, a date has been confirmed by Transport Secretary Grant Shapps on when hospitality businesses can restart.

Caravan parks and campsites have become the next holiday trend to sweep the nation as travel restrictions and quarantine rules remain in place. However, it seems Britons may have to wait a while longer before they can visit campsites and holiday parks. Despite mounting calls for holiday and caravan parks and campsites to reopen earlier, it appears the date for reopening remains much the same.

Transport Secretary Grant Shapps confirmed today that they would not reopen until July 4.

The date was always on the cards for business owners in the hospitality industry, but due to caravan parks and campsites being able to allow guests to isolate and self-distance so easily, there was hope that they may open earlier.

Mr Shapps made the declaration on Radio 4 Today Programme.

He said: “It wont be weeks and weeks away.

“We know that the next review… or the next potential date for an unlock, if its possible, if the science allows, is July 4 onwards.

“So it wont be weeks and weeks away.”

Mr Pritchard has been campaigning for holiday parks to reopen earlier and was hoping that England may take the same approach as Northern Ireland who announced yesterday that their caravan parks and campsites would reopen on June 26.

He said: “In England, we have a government ambition to open holiday and touring parks on 4 July.

“In Scotland we have an indicative date of 15 July.

“Guidance on procedures is expected soon but we have no idea when opening dates will be confirmed to give us and our customers certainty.

“Its worse in Wales where currently we have no prospect of opening at all.

“The Welsh First Minister has expressed his sympathy for our plight, but no more.

“Sympathy wont keep the wolf from the door!”

Raoul Fraser, owner of Lovat Parks, said that he urged the government to provide holiday caravan parks with clarity on reopening and what steps need to be put in place.

Mr Fraser said: “Holiday caravan parks are set to play a vital role in rebuilding the UK’s regional economy this summer, as they offer families a safe way to connect with nature, embrace a healthy outdoor lifestyle and enjoy a well-needed break.

We have done all we can to put safety measures in place, including implementing extensive hand sanitiser stations through-out the parks, offering PPE, and following team training and risk assessments as devised by the British Holiday and Home Park Association.

“We are now urging the government to provide further clarity as soon as possible.”

Tory MP Iain Duncan Smith said recently that the government should be providing clear guidelines for campsites and caravan parks.

He said: “If campsites and caravan parks are not sure of the way ahead because of unclear guidance, then the Government has got to make a move on that.”