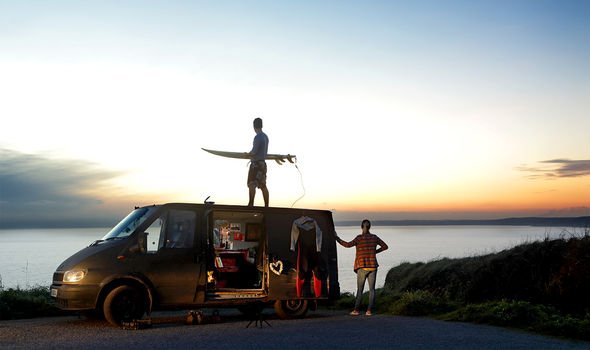 CAMPSITES and holiday parks are set to be inundated this summer as Britons scrap foreign holidays in favour of dreamy staycation spots. And if sleeping in a tent isn’t your idea of a luxury holiday, then hiring a campervan might be your best option.

Camping and caravans are already set to be more popular this year as Britons seek holidays closer to home. Currently, the UK government is stating that Britons are not allowed to sleep away from their own primary residences. Campsites are preparing to open in July with social distancing measures in place.

Campsites will also likely be working at a reduced capacity.

Under the governments plans to slowly ease lockdown restrictions, accommodation businesses are aiming to open on July 4 which will include campsites, caravan and holiday parks.

Indie Campers, a company that owns Europes largest fleet of campervans for customers to rent, has seen a similar surge in bookings.

In May, the company saw a 217.35 percent increase in the share of domestic bookings compared to May last year.

As domestic travel regulations are lifted across Europe, trends are arising of holidaymakers seeking domestic trips.

The trend is already making its way across Europe, with the UK swiftly following suit.

The share of domestic bookings have increased 294 percent year-on-year in the UK.

Holidaymakers are now choosing more independent forms of travel which are more sanitary and isolated.

He said: “Globally our domestic bookings account for more than 76 percent of our bookings so far in May, compared to only 24 percent in May 2019.”

Mr Olivera added that Germany and the UK usually amounts to over 90 percent of bookings abroad but that now Germans are seeking to holiday at home.

He added: “As an example, our British and German clients used to stand out as they had more than 90 percent of bookings overseas.

“However, for May, after Germany removed travel restrictions, over 84 percent of our large number of German bookings are domestic.

“We expect similar patterns in the UK once the country opens up later this summer.”

Although July 4 is currently the earliest possible reopening date for campsites and caravan parks, this will only apply if the governments tests have been met.

The tests include strain on the NHS, death rates, infection rates, testing and PPE equipment.

Currently, caravan and camping holidays are deemed the “safest” way to holiday due to it being in an outdoor environment and easier to isolate from other people.

Foreign and Commonwealth Office (FCO) guidelines state that travelling abroad is not permitted unless it is for “essential purposes”, meaning that more people are looking to travel in the UK.

This advice is set to remain in place “indefinitely”.