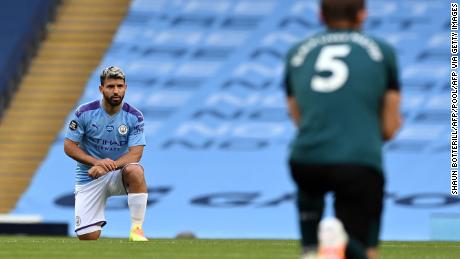 Since the English Premier League's resumption last week, all players of the 20 top-flight clubs have replaced their names with the message "Black Lives Matter" on the back of their jerseys."We wish to make it clear that those responsible are not welcome at Turf Moor," read the Burnley statement."This, in no way, represents what Burnley Football Club stands for and we will work fully with the authorities to identify those responsible and issue lifetime bans."The club has a proud record of working with all genders, religions and faiths through its award-winning Community scheme, and stands against racism of any kind."We are fully behind the Premier League's 'Black Lives Matter' initiative and, in line with all other Premier League games undertaken since Project Restart, our players and football staff willingly took the knee at kick-off at Manchester City.""We apologize unreservedly to the Premier League, to Manchester City and to all those helping to promote 'Black Lives Matter.'"Manchester City won the game 5-0 to keep alive its slim hope of retaining the Premier League title.READ: Everton holds up Liverpool's title charge

Monday's game was the 12th Premier League match to be played since the season resumed after it was interrupted by the coronavirus pandemic.As well as supporting the Black Lives Matter movement, Premier League players have been taking a knee Read More – Source