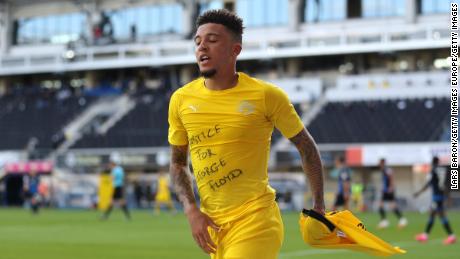 Bayern had to come from an early goal down to secure its victory, with Robert Lewandowski scoring his 30th league goal of the season in the second half to help seal a hard-fought victory.Nearest challenger Borussia Dortmund scored a later 1-0 home win over Hertha Berlin to stay in touch, but with only four games remaining of the league season Bayern is heavy favorite for an eighth straight German title.But with large protests in Munich and Berlin for racial equality and against police brutality following the death of George Floyd last month, events off the field have influenced events on it.Bayern's players warmed up in T-shirts with the Black Lives Matter hashtag and the club's official "Reds Against Racism" logo. "FC Bayern stands for a world in which racism, discrimination, hate, injustice and violence have no place," said a club statement.Last weekend saw a number of Bundesliga players make their own individual protests, including England star Jadon Sancho of Dortmund, Marcus Thuram, the son of French World Cup winner Lilian Thuram, and US midfielder Weston McKennie of Schalke.Before this weekend's matches, Bundesliga officials announced there would be no sanction for other players and teams for anti-racism protests.Bayer, looking to secure Champions League qualification, made a fast start with Lucas Alario on target before Kingsley Coman, Leon Goretzka and Serge Gnabry hit back to give Bayern a 3-1 lead at the break.Lewandowski made it 4-1, his 44th of the season overall, with Leverkusen teenager Florian Wirtz making his own bit of Bundesliga history by becoming the youngest scorer in its history at 17 years and 34 days.RERead More – Source