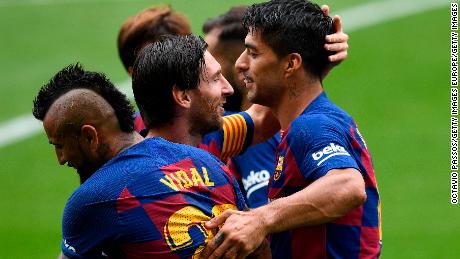 Iago Aspas' free kick in the 88th minute earned Celta a 2-2 draw after Suarez had twice given Barcelona the lead with assists from his pal Lionel Messi on both occasions. Follow @cnnsport The result means Barcelona moved ahead of Real Madrid by a point atop the standings but Los Blancos have played one fewer game and hold the advantage if the teams finish tied on points by virtue of having a better head-to-head record. "We've got little margin for error now and in theory, we have to win all our games and hope our rival slips up," Barcelona manager Quique Setien was quoted as saying by Marca. "We'll try to keep picking up maximum points."Barcelona's struggles at Vigo continued, having won only once in the league there since 2015. Vigo might have been 16th but had only conceded once in its previous seven games. While Barcelona was able to breach Celta Vigo's defense, the away side itself couldn't defend. Suarez gave Barcelona a 20th minute lead, catching Vigo off guard. Messi, taking a free kick just outside the penalty box, passed to Suarez instead of shooting on goal himself and the Uruguyan made no mistake for his first goal since returning from knee surgery. But early in the second half, Vigo leveled on the counter. With the Barcelona defense out of position in the 50th minute, Vigo went forward on a 2-on-1 break. Fyodor Smolov ended the move with a simple finish. Suarez's clinical finish inside the box in the 67th minute restored Barcelona's advantage before Aspas' low free kick around the wall completely caught out Barcelona keeper Marc-André ter Stegen. "We shouldn't have got into that situation because we were much the better team in the first half," said Setien. "We had to have gone in at the break with a more comfortable scoreline."Barcelona now hope that hometown rival Espanyol can do them a favor Sunday when it hosts Real Madrid. But Espanyol sits last in the standings.

Meanwhile, on the final day of the Bundesliga in Germany, Bayern Munich — which clinRead More – Source