As he fights racial injustice, Sterling is ‘not thinking about his job’ 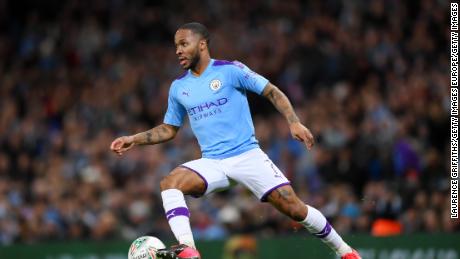 "I don't really think about my job when things like this happen. I think about what is right and at this moment in time, you know, there's only so much people can take," the 25-year-old England international told BBC Newsnight, as he reflected on the global protests that have been sparked by George Floyd's death."It has been going on for hundreds of years and people are tired. People are ready for change. I keep saying this word."I see a lot of people on social and stuff supporting the cause but this is something that needs more than just talking. We need to actually implement change."READ: Hamilton supports protesters who tore down statue of slave trader

After being subjected to racist abuse from fans during a game against Chelsea in the English Premier League in 2018, Sterling accused newspapers of "fueling racism" with their portrayal of young black footballers.Whilst admitting the protests following Floyd's death were a "great starting point" in sparking conversations, he says real change will only occur when black people are better represented in positions of authority."There's something like 500 players in the Premier League and a third of them are black and we have no representation of us in the hierarchy, no representation of us in the coaching staff," he said."There's not a lot of faces that we can relate to and have conversations with."Nuno Espirito Santo of Wolves is currently the only active manager from a black, Asian and minority ethnic (BAME) background in the English Premier League after Chris Hughton was sacked by Brighton in 2019.Hughton believes long held racist stereotypes led to the loss of influential black players who could have been managerial role models for future generations. "The disappointing fact is that we haven't made that progress," Hughton told CNN. "In particular in an era where it's been spoken about more than any other time."Sterling used the comparison of four previous Premier League stars — Steven Gerrard, Frank Lampard, Sol Campbell and Ashley Cole — all of whom enjoyed successful playing careers.However, Rangers manager Gerrard and Chelsea boss Lampard are the only two to have been given a chance to manage at elite clubs."At the same time, they've all respectfully done their coaching badges to coach at the highest level and the two that haven't been given the right opportunities are the two black former players," said Sterling.Visit CNN.com/sport for more news, features, and videos

'We want to find a solution'

Thousands have turned out to take part in Black Lives Matter marches in major UK cities such as London, Bristol, Manchester and Edinburgh despite government advice that people should avoid mass demonstrations.While leading ministers have criticized protesters for flouting social distancing measures, Sterling says people are right to attend and that "the only disease right now is the racism that we're fighting.""This is the most important thing at this moment in time because this is something that is happening for years and years," he said."Just like Read More – Source