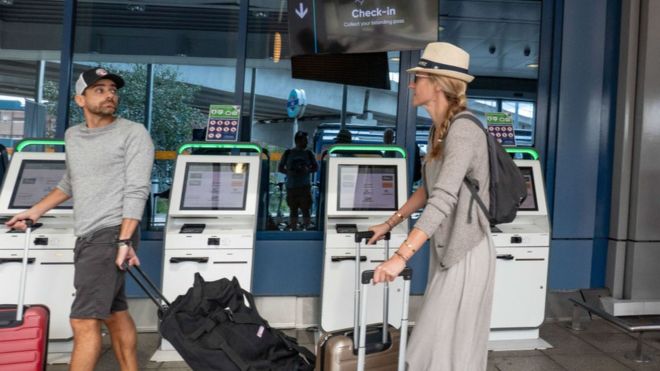 The UK government has insisted plans to quarantine travellers for 14 days will go ahead for a “temporary, time-limited” period, despite signs No 10 is increasingly favouring the option of “air bridges” with low-risk countries.

Simon Clarke, a local government minister, said the moves to impose a quarantine were essential to stop the risk of new imported cases of coronavirus as the UKs infection rate came down.

The MP told BBC Breakfast: “This is a temporary, time-limited measure to make sure that we avoid that risk manifesting itself.

“It is very clear that as of Monday 8 June a two-week quarantine is in place for people coming into the UK from abroad and that needs to be understood very clearly.

“It will obviously depend on progress and we all want these restrictions to be lifted as soon as its safe to do so.”

However, a Conservative backbench rebellion has prompted Downing Street to think again about bringing in air bridges – reciprocal arrangements with some countries that have a low rate of infection.

One sticking point is that some countries will not want to strike an agreement with the UK when its death and new infection rate is still relatively high, but a few such as France have indicated they would be willing to do a deal that could allow some travel to continue.

Clarke refused to comment on the idea of moving from a quarantine policy to air bridges but suggested it could be one of the “options” for replacing it with less draconian measures in time.

Asked about the idea of air bridges, Boris Johnsons spokesman said on Monday: “Weve said its something that were looking at, and that remains the case.”

Under the new rules, from next Monday tens of thousands of new arrivals to the UK will be able to go food shopping, change accommodation and use public transport from airports during a 14-day quarantine imposed to prevent a second wave of coronavirus.

About a fifth of people are expected to receive a spot-check to ensure that they are staying at the address or addresses they have provided to the authorities, but enforcement of the quarantine will be limited.

The rules, still being finalised and due to be published on Tuesday before coming into effect next week, have prompted cross-party concerns about the potentially limited impact on public health amid warnings of the severe damage that could be caused to the travel and aviation industry.

Former transport minister Stephen Hammond called again on Tuesday for the plan to be scrapped.

“I think the idea of air bridges are the right way forward,” he added. “I think, as weve seen across the world, people are taking measures out of the lockdown and this targeted approach would be a much more sensible way to behave.”

Henry Smith, the Crawley MP whose constituency covers Gatwick airport, also said he hoped the quarantine measures could be short-lived.

“In practical terms, making sure this quarantine is reviewed in the next few weeks with a view to hopefully being dropped by 1 July is probably the most practical way forward,” he told the BBC.

Smith, who is heading a cross-party group of several dozen MPs opposing the plans, previously told the Guardian the exemptions under the draft rules meant the quarantine proposals made even less sense.

“It really feels like it will bring limited public health benefit for a lot of economic pain,” he said. “There were already some absurdities to the idea, like backdoor routes, so you could fly to Dublin, go Dublin to London, and then not be checked.”