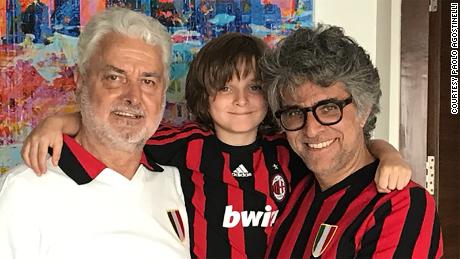 But if there is to be a fate worse than finishing as the runner-up, it's being remembered only because you blew it, choked, snatched defeat from the jaws of victory. The history books of sport are littered with many such examples. Golf can be particularly cruel; just think of Greg Norman's epic collapse in the 1996 Masters or the hapless Jean van de Velde at the 1999 Open Championship, where he threw away a three-shot lead on the very last hole. Such calamities can define a career or even shape the identity of a city. Atlanta in the United States is still maligned because of the Falcons' monumental capitulation in Super Bowl LI, when they somehow blew a 25-point lead late in the third quarter of the NFL's showpiece game. Whilst Milan is not a city you'd ever associate with sporting failure — their football teams AC Milan and Internazionale are among the most successful in Europe — there is one particular outlier: In the 2005 Champions League final, AC Milan raced into a 3-0 lead against Liverpool and somehow trudged off the field as losers. Earlier this month, former AC Milan goalkeeper Dida, who played in the final, told CNN, "It's truly difficult to imagine after that first half, which we performed practically to perfection, that we would lose three goals."READ: Liverpool's agonizing wait for English football's biggest prize

'The team was spectacular'

As is always the case, the victors write the history. Fifteen years later, that game is still celebrated as 'The Miracle of Istanbul,' one of the greatest nights in European club football. But not for the losers; for them, it was a nightmare. Milan's perspective of that fateful night is not one you often hear. To say that Milan were the favorites in Istanbul would have been a serious understatement; the class of 2005 was a team packed full of international megastars and high achievers. Seven of Milan's starting 11 had won the Champions League just two years previously.Brazilians Cafu, Dida and Kaka were all World Cup winners, while the following summer, Andrea Pirlo, Gennaro Gattuso and Alessandro Nesta would be world champions with Italy.Ukrainian striker Andriy Schevchenko was the 2004 Ballon d'Or winner, arguably the greatest individual recognition in the game and an honor that Kaka would later claim in 2007. Captain Paolo Maldini was a Milan and Italy legend, regarded as one of the best defenders in the history of the game and a player who'd won four of his five European Cups by the time of this game. "The team was spectacular," lifelong Milan Paolo Agostinelli, who had tickets to the game in Istanbul, but had to cancel his trip at short notice, told CNN Sport. Nonetheless, as he tuned in to watch the game on television, he expected only one result, "I was positive that we would have won that match, I was confident. I was very confident." READ: From footballer to Netflix superstar: How Jesus Mosquera became one of Spain's top actorsThe reason for such heady optimism wasn't just Milan's galaxy of stars; it was the perceived weakness of the opposition. Though Liverpool had once dominated the English league and European competitions, such success was — by that time — a rather distant memory.In 2005, Liverpool's domestic performance in the Premier League was so poor that they hadn't even qualified for the next Champions League season. They'd finished fifth. Milan's starting 11 was a who's who of international football; Liverpool's team was more of a 'who are you?' In the 20 years since Liverpool had even played in the European Cup final, AC Milan had won it four times. Granted, Liverpool's ambitions were hampered by UEFA's five-year ban for all English teams after the Heysel Stadium disaster, but regardless — they'd been absent from the top table for a long time. On the eve of the game, the teams made their case to the international media. Maldini was compelling; "History counts and in recent years, Milan has always been at this level." Liverpool's first-year manager Rafael Benitez told the assembled press that he was hoping for an early goal, but Maldini volleying the ball into the back of the net after just 50 seconds was not quite the early strike that he had in mind. As Paolo Agostinelli remembers it, "We were playing fabulous football, the team was confident and everything was fine and then Maldini scored. That was a sign of destiny. Maldini never scores." Milan were purring; their Brazilian goalkeeper Dida chuckled when CNN asked him recently if he had much to do in the first half: "Honestly not much," he admitted. "The concentration and focus of the team were extremely high." By halftime, a couple of goals from Hernan Crespo had given the Italians a 3-0 lead. It was a lead that seemed insurmountable. 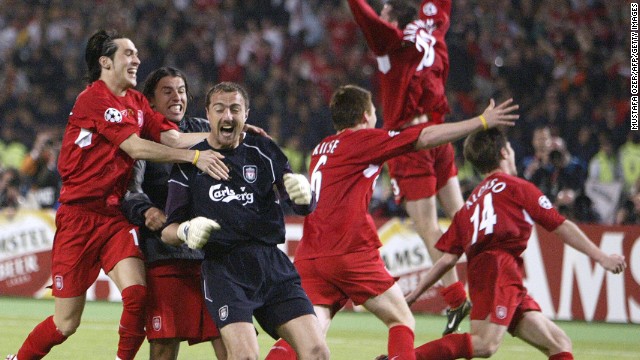 Antonio Greco goes by the name Uccio. Founder of the Gallipoli supporters club in 1984, he's a lifelong Milan supporter, estimating that he's been to some 400 games. He's watched them lift the European cup in Madrid, Barcelona, Vienna, twice in Athens and also Manchester."It was a great first half; the supporters asked me to unveil our celebratory banners." But then, in the second half, "something unreal happened." 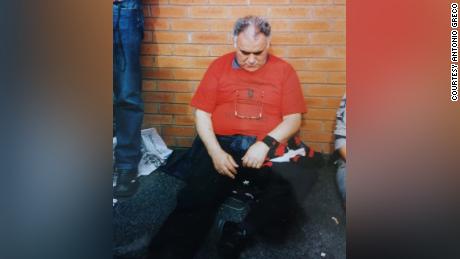 What happened next has become the stuff of legend in Liverpool. As the teams left the field for the fifteen-minute interval, it was hard to tell which team was losing. The supporters at the Liverpool end of the Atatürk Stadium defiantly held their scarves aloft, serenading their heroes with hymns of praise and the spine-tingling 'You'll Never Walk Alone.' The Liverpool players could hear it from their dressing room, and defender Sami Hyypia told CNN" "Maybe that gave us a little bit of strength. Rafa Benitez just said, 'Look boys, it can't continue like this. We have to give the fans something to cheer about in the second half.' He was quite calm." Across the hall, the Milan team was also calm, or tranquillo, as Dida put it: "Our trainer Carlo Ancelotti was tranquil; he didn't say much to us, but he said that we still had to put in all our efforts because there were still 45 minutes left. Therefore, we knew that we still had to make an effort." Football is a sport littered with clichés, but rarely has there ever been such a 'game of two halves.' READ: 'A question of survival': European soccer faces $1 billion decisionAfter the break, Liverpool looked like a completely different side; a header from their young captain Steven Gerrard made the score 3-1, and within two minutes it was 3-2, thanks to Vladimir Smicer. Milan were rattled, and so were their fans. Back home in Italy, Agostinelli said that he'd stopped paying attention during halftime. His friend — a Juventus supporter — asked if they even really needed to watch the second half. But when Liverpool began scoring, the television had his attention again. "I was petrified. I had a feeling of something sinister going up and down my back." Within just 15 minutes of the restart and only six minutes after Liverpool's first goal, the game, incredibly, was tied at 3-3. Dida saved a penalty from Xabi Alonso, but the Spaniard followed up on the rebound to score the equalizer. Watching in disbelief from Milan, Agostinelli said, "When I saw that Dida had made the save, but it still wasn't enough, in that very moment, I knew this was lost." Inside the stadium, Milan's supporters were witnessing an epic collapse and an extreme shift of emotions. Greco was trying to process what he'd just witnessed, he told telling CNN, "I was shocked, literally. I couldn't stand anymore and my first thought was to get to the airport and go back home as soon as possible." When you ask players from both sides what happened, none are really able to explain it.Dida described the anxiety creeping in, but felt they still had "the ability to do more in the game; we had the strikers, we had the strength in our legs. Even though it was 3-3, we still thought we could win the match." 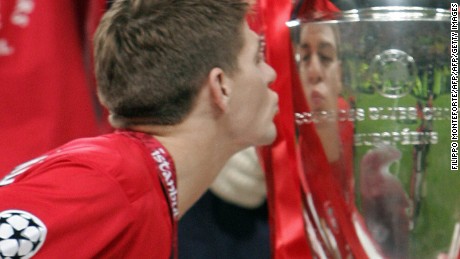 Level after 90 minutes, the game went to an extra period of half an hour; but with the drama of a penalty shootout looming, Milan still had one last chance.It fell to their exceptional striker Schevchenko, but he was twice brilliantly denied by Liverpool's Polish goalkeeper Jerzy Read More – Source