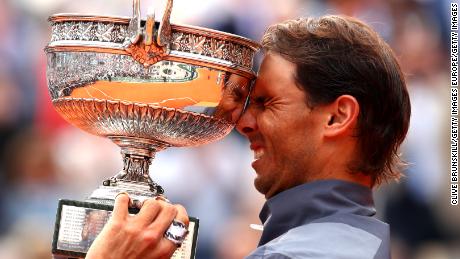 The ATP and WTA tours have been suspended until at least mid-July, with Wimbledon already canceled and the French Open, where Nadal has won a record 12 titles, postponed until late September.However, the 19-time grand slam champion is doubtful of returning to the court anytime this year."I hope we're able to return this year, but I don't think we will," he told Spanish newspaper El Pais on Tuesday. "Unfortunately, I would sign up to be ready for 2021 — hopefully."I'm more concerned about the Australian Open (in January) than about what happens later this year. I see 2020 as practically lost. I have hope to be able to start next year, that's what I wish."Nadal is dedicating some of his free time to helping those in need and has teamed up with Spanish NBA star Pau Gasol and joined 'Red Cross Responds,' a project aiming to distribute food and care packages and provide support to more than 1.3 million vulnerable people across the country.READ: Billie Jean King says record-chasing Serena Williams should see tennis break as 'positive'READ: Tennis star Dominic Thiem rejects plans to help struggling players through coronavirus crisisSpain has become one of the European nations most affected by the pandemic, recording more than 219,000 cases and 25,613 deaths."We are trying to unite as many people as possible to create something beautiful," said Nadal. "I am very grateful for everyone's collaborative effort: athletes, artists, companies, federations, citizens."I'm a sentimental person, who is affected by things and seeing so many people suffering so much, so many people who have lost family members without even being able to say goodbye."In the end, being able to hug your brother or sister alleviates some of your pain and imagine that they have not even been able to do that. You have to be positive and keep moving forward. There is no other choice."

While the ATP and WTA tours may have been suspended, tennis returned for the first time during the coronavirus pandemic with the Read More – Source