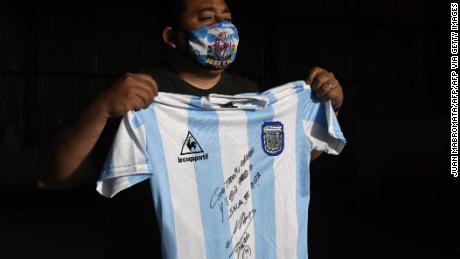 'We're going to get through it," wrote the football legend on the shirt in an upbeat message to a country battling to stop the spread of Covid-19. Argentina is also facing serious economic hardship as it struggles with debt repayments. The jersey is being raffled to raise money for a working class neighborhood of Buenos Aires.The raffle will be restricted to those who have already given donations in an initiative that has collected hygiene products, masks and around 100 kilograms (220 pounds) of food for charity. "Diego can't even imagine what he has done for us, it's priceless. I'll be grateful to him until the day I die," said local resident Marta Gutierrez. Maradona spent his formative years in Buenos Aires, playing for Argentinos Juniors and his beloved Boca Juniors before his transfer to Barcelona in 1982 for a then world record fee.The peak of his career came at the 1986 World Cup where his individual brilliance lifted Argentina to the ultimate prize in world football, beating West Germany 3Read More – Source