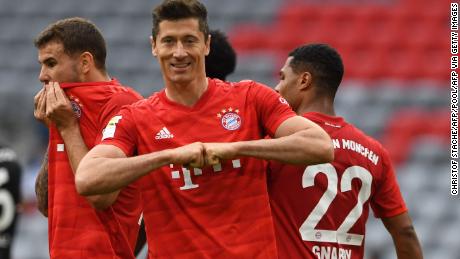 The visitor to the Allianz Arena was the only Bundesliga team Lewandowski had never scored against prior to the match but he put that right in a one-sided rout.Follow @cnnsport In-form Bayern might well have been contesting the Champions League Final, which was scheduled for this Saturday before the coronavirus pandemic played havoc with the season, but its performances since the Bundesliga resumption a fortnight ago will give the Bavarian giant great confidence when Europe's premier club competition does gets underway again.A midweek 1-0 victory over Borussia Dortmund has left Bayern in the driving seat in search of yet another German title, with Dortmund needing to win at SC Paderborn Sunday to reduce the gap to seven points with only five rounds of matches to play.Home teams had only won five of 27 matches since the Bundesliga restarted,heading into Saturday's round of fixtures, but that statistic was never going to worry Hansi Flick's team.There was a touch of good fortune for the opener on 14 minutes as Mathias Jorgensen turned Benjamin Pavard's mis-hit shot into his own net.French defender Pavard did make it 2-0 just before the half hour mark as he met Joshua Kimmich's corner with a trademark thumping header.With Fortuna in retreat, a brilliant Bayern team goal saw the third on 43 minutes with Lewandowski getting in the act by converting after unselfish work by Thomas Muller.The Polish star's second came soon after the break as he flicked home a low cross from Serge Gnabry. It was a 29th Bundesliga goal for Lewandowski and his 43rd in all competitions, equaling his best for the season with several matches still to play.The rout was completed soon enough by flying Bayern defender Alphonso Davies, who picked up a loose ball and beat two men before scoring the fifth. 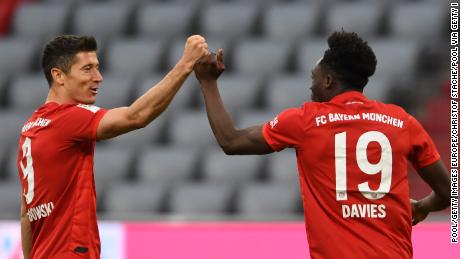 Muller missed a golden chance for a sixth, but it was of no significance as Bayern eased to victory and made its full complement of five substitutions to save legs for further challenges to come at home and in Europe, holding a 3-0 first leg lead over Chelsea in their Champions League last 16 tie when the season was halted in March.

Earlier, Werder Bremen gave itself further hope of survival with a 1-0 win at David Wagner's Schalke to move within a point of Fortuna Dusseldorf,Read More – Source