In eerie silence, Bayern Munich close in on Bundesliga title with win over Dortmund 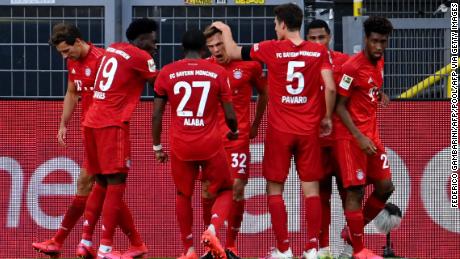 It makes no difference to the relentless way Bayern collect Bundesliga titles and the Baverian club is on the verge of yet another after a 1-0 victory over rivals Borussia Dortmund.The result leaves Bayern Munich with a seven-point lead at the top of the table and within sight of being crowned German champions for an eighth successive season. It would need to drop points in at least three of their remaining six matches and that would require a vulnerability that Bayern almost never show.READ: Footballers emerge from lockdown with some unexpected new looksJoshua Kimmich scored the crucial goal, shortly before half-time, with his deft chip from outside the Dortmund penalty area beating keeper Roman Bürki. It was a sublime touch for a defensive midfielder and one that we instead might have expected to see from one of the two star strikers who started the game.This had been billed as a showdown between Bayern's Robert Lewandowski and Dortmund's Erling Braut Haaland. Lewandowski, the experienced and prolific former Dortmund forward, is the Bundesliga's leading scorer. Haaland, the teenage phenomenon, is coveted by some of the biggest clubs on the planet for his pace, strength and goal scoring prowess.Yet neither found the back of the net in this game — although Lewandowski did see a deflected shot hit the post in the second half — and Haaland's match ended early when he limped off twenty minutes from the end.Borussia Dortmund versus Bayern Munich was, unquestionably, the most significant event since some top level sport has resumed after the coronavirus disruption. Germany's two leading football teams in a match that could all but decide the fate of this season's Bundesliga title. 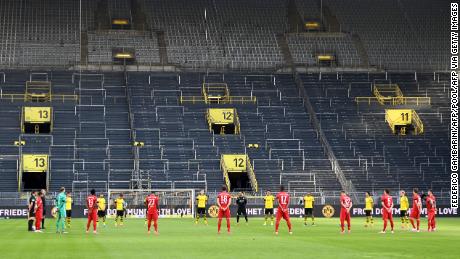 The viewing figures could be interesting in light of the historic numbers recorded by "The Match II" last weekend. If what was, effectively, a charity golf contest could attract the sport's largest cable TV audience ever, then how many more would tune into German football's biggest rivalry at a crucial stage of the championship race? Here in the UK, we already know that UK broadcaster BT Sport recorded a fivefold increase on their previous best performing Bundesliga match for Dortmund's match last weekend.Late season encounters between Bayern and Dortmund have been one-way traffic in recent seasons. The Munich team winning the last three such games by an aggregate of 15 goals to one.Yet, this game looked like it might be different as Dortmund began brightly — even getting the ball in the net in the 10Read More – Source