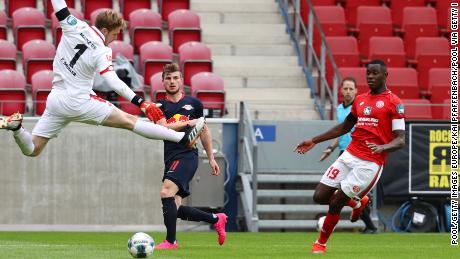 Werner — reportedly a transfer target of Premier League leader Liverpool — netted three goals when Leipzig hammered Mainz 8-0 in November and got three more in Sunday's 5-0 away victory that kept his side's slim title hopes alive. Leipzig moved to within seven points of table-topping Bayern Munich — which downed Eintracht Frankfurt 5-2 on Saturday — after dropping two points against Freiburg last weekend. It is the second weekend of action in the Bundesliga, which was the first major sporting league to resume amid the global coronavirus pandemic. Werner ended a spell of four games without scoring and increased his league tally to 24 goals, second only to Bayern Munich talisman Robert Lewandowski's 27. In truth it could have been worse for relegation threatened Mainz. Yussuf Poulsen missed a sitter after Werner's pass in the first half and Christopher Nkunku dragged his shot wide when in alone on keeper Florian Muller, also in the first half.Poulsen, though, did score earlier. It was hardly an upset given their respective places in the standings, but since the German top division returned last week following a two-month stoppage, home teams overall have found it difficult playing with no fans.They have won three of 18 matches, losing 10 times. Earlier Sunday, eighth-place Schalke fell 3-0 at home to Augsburg, which had been in the bottom five, and in the late kickoff Koln neeRead More – Source