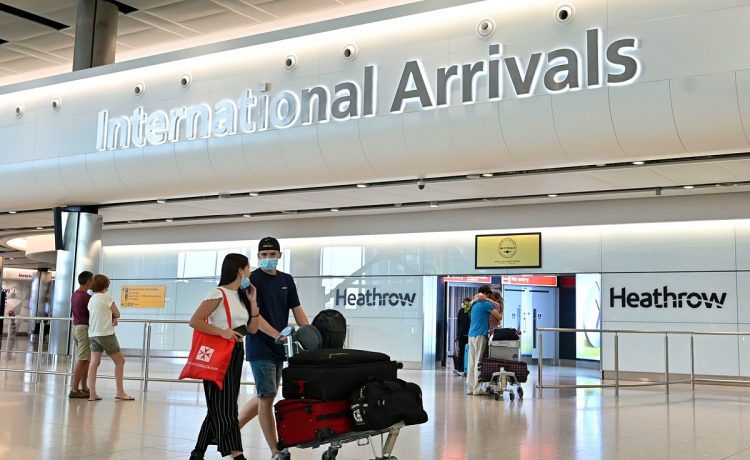 PEOPLE arriving in the UK from overseas risk being slapped with a £10,000 if they are caught flouting the strict 14-day quarantine rule.

Two months after the nationwide lockdown was imposed, government ministers have drawn up plans to introduce a self-quarantine period as travel restrictions are eased. The so-called “travel bridges” being considered would see journeys between Britain and countries with low infection rates permitted.

But anyone caught breaching rules designed to limit the spread of COVID-19 could be hit with a fine ranging from £1,000 to £10,000.

The paper quoted a Whitehall source as saying: “We want to send a very clear message to discourage people from breaching quarantine.”

Only travellers coming in from the common travel areas would be exempt from the two-week quarantine.

This would mean air and sea passengers from Ireland, Jersey and Guernsey will not have the observe the strict self-isolating rule.

And a “very limited” group of up to professions would also be exempt.

The Government has yet to announce what the 30 professions are.

Reports suggest lorry drivers delivering essentials such as food and medicine would be included in the category.

During questions in the House of Commons, Transport Secretary Grant Shapps said the finalised travel arrangements would be announced in June.

He told the House: “The final details of the quarantine scheme will be released soon and come in early next month.”

The timing will not be welcomed by travel industry officials.

Imposing the 14-day quarantine rule in June will mean the strict travel rules will come into effect as the summer holiday peak begins.

Ryanair hit out at the plan, calling it “nonsense” that travellers should have to hide away from the outside world for two weeks.

CEO Michael OLeary said he believed ministers had resorted to “making stuff up as they go along”.

In an interview on Skys Ian King Live, he said it would be important to get the business up and moving again “and offer people a holiday before schools return in September”.

He said Ryanair would be “doing our level best to minimise contact” when the flight schedule begins to return to normal as the company seeks to protect the health of passengers and staff.

He said the airline was working on “getting every route restarted but with a reduced frequency”.

Mr Shapps said the plan to allow travel between only selective nations was just one part of the Governments vision.