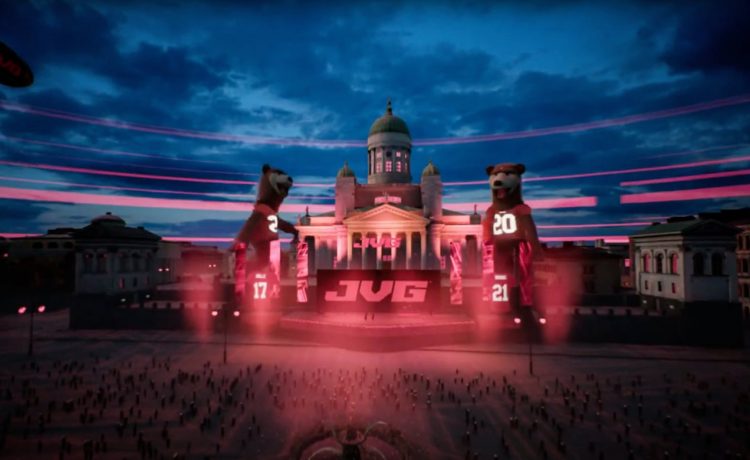 According to Finlands National Police Board, this years Vappu Eve (the festive night before May Day, when the country traditionally enjoys public fun and frolics) was “exceptionally peaceful”. Citizens largely respected calls to stay at home. And yet … I found myself at a gig in Helsinkis Senate Square with almost 150,000 other people. I was dressed as a giant pineapple called Temperamenttinen Satuilija (Temperamental Fabulist!), and was tossing champagne at Finnish rap duo JVG as they performed live on a stage, in front of the citys neoclassical cathedral. Just another day in lockdown.

Though it happened in real time, the event was held in the virtual world. While Temperamenttinen – my avatar – was bopping in the Nordic twilight, I was at home, at my computer, cat on knee, finger on mouse, sending gestures and fizz-bottle emojis to the duo, who could see the feedback as they performed. I cant say it had the buzz of being at a “proper” concert. And JVG werent my personal jam. But, technically, it was impressive. Without the requirement of a VR headset, I was watching humans, performing in real time, in front of an interactive audience, within a world of meticulously rendered make believe.

Virtual Helsinki – launched in late 2018 – is the physical capitals digital twin. It was built using 3D modelling from open data (supplied by the city), as well as drawings and images. It allows users to experience key landmarks as they choose, and it claims to be one of the worlds most realistic VR experiences.

The platform is part of the citys bid to become the virtual capital of the world. “We are embedding digital innovation into all of the citys activities. Simply, digitalisation builds better cities – it means personalised services and more choice,” says Laura Aalto, CEO of Helsinki Marketing. Helsinki is a good test-bed for VR: big enough to enable the development and trial of significant innovations, small enough for it to be feasible.

The Covid-19 lockdown has spurred such a trial. “We realised we could use Virtual Helsinki for the local community, by inviting citizens to participate in a virtual celebration with one of the countrys most popular artists,” says Aalto. Development of Virtual Helsinkis gig platform was accelerated, including new features, such as bringing in audience avatars. Zoan, the Helsinki-based VR studio behind the project, squeezed half a years work into five weeks. It worked.

The live show was watched on 460,000 computers. With a conservative estimate of 1.5 viewers per computer, that is almost 700,000 people – Finlands biggest online event. Of those, 149,403 attended by creating avatars, though the camera largely focused on the band and, with only 500 avatars visible at a time, youd have been lucky to pick yourself out on screen – even dressed as a pineapple.

The gig was a success, but what does it – and virtual tourism more widely – mean for the future of travel? Helsinki is seeking to be a pioneer of sustainable tourism, and allowing people to visit without racking up carbon emissions certainly aids that.

“The travel industry needs to reinvent itself and I hope this encourages other destinations to experience with digital platforms,” says Mikko Rusama, chief digital officer at City of Helsinki. “Some are suspicious and think no technology can replace a real visit – which in a way is true. But VR can bring about new experiences that are impossible in real cities.”

Audience of avatars attend the gig

Virtual Helsinki plans to develop its content – art exhibitions, shopping experiences, “re-lived” historical events – and to make it all multi-user. “Multiplayer functions enable visitors to become social in virtual cities,” says Rusama. “That will have a big impact on peoples interest to explore places virtually.”

But, when were permitted to move again, will the city have made actually visiting it feel unnecessary? “No, the idea is to offer visitors an alternative way of experiencing the city in addition to travelling here,” says Aalto.

“Customer behaviour is likely to change radically post-corona[virus]. We wont stop travelling but the reasons will be different. We need a stronger “why”; visits will be more in line with what we stand for. The winners in the future tourism industry are those that can understand and meet the values of visitors.”

Right now, destinations across the world are brainstorming ways to create virtual content to keep visitors interested while travel is off-limits. There are 360-degree tours: we can scan the mountains of Switzerland, the skyscrapers of Dubai or the Great Barrier Reef ; and 3D modelling allows us to take tours of Egypts ancient wonders that offer such clarity we can see chisel marks on the walls. Also, festivals and events have moved online: the Grand Ole Opry, Nashvilles weekly country music concert, which hasnt missed a show in its 95-year history, is now streaming every Saturday night.

And we can expect more, believes Dr Timothy Jung, founder and director of the Creative AR & VR Hub at Manchester Metropolitan University. “The role of VR will increase,” he says. “The tourism industry may need to consider hybrid experiences – a combination of real and virtual – in the future. And, after this forced isolation, people will be more open for virtual experience as an alternative way of socialising and enjoying life. It might be accepted as the new normal within tourism.”