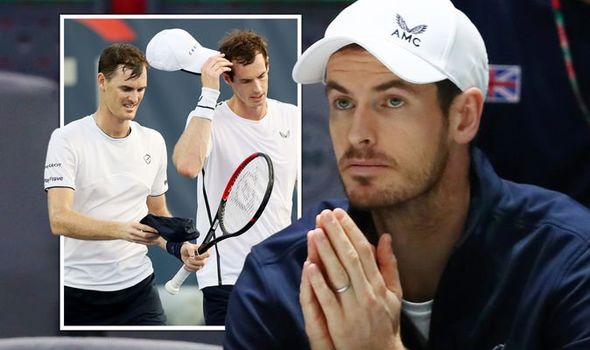 Andy Murray is set to play his first tennis match in 2020 next month.

Three-time Grand Slam champion was last seen on a tennis court on November 20 at the Davis Cup representing Great Britain.

A recurrence of his hip problems forced him to miss the start of the 2020 season then a planned comeback in March was scrapped due to the coronavirus pandemic.

Following the lift in lockdown restrictions by the UK Government, Andy Murray has been able to practise recently at the National Tennis Centre in Roehampton.

This week, the LTA announced they were lining up a series of events to take place this summer in the absence of Wimbledon, which was cancelled.

One of those events will be a six-day Schroders Battle of the Brits, co-organised by Jamie.

The event, from June 23 to 28, will feature Britain’s top male players including the Murray brothers, Dan Evans and Kyle Edmund and played behind closed doors.

It also aims to raise £100,000 for NHS charities impacted by coronavirus.

Jamie said: “The last few months have been incredibly challenging times for everyone, and we see this event as our way of giving back.

“A lot of work has gone in to make sure this could happen and we are very excited to be able to bring an action packed week of tennis, while raising valuable funds for NHS heroes to say thank you for the amazing work they have done.

“Im really excited to be putting on Schroders Battle of the Brits and for the first time bringing together the current generation of British male players to compete against one another while raising significant funds for charity.

“I am particularly grateful to our broadcast partner here in the UK, Amazon Prime Video, for enabling this event to happen.”

Scott Lloyd, LTA Chief Executive, added: “The LTA is looking forward to bringing tennis back into peoples lives this summer and are excited about events like this inspiring fans to get involved in our sport and pick up a racket.”

“Weve been discussing this event with Jamie for some time and support his efforts, and those of others, to put on events as part of a co-ordinated plan in returning to elite competition.

“We are represented on the UK Sport working group advising Government on the necessary protocols for the return to elite sport and when the Government is able to announce this phase of eased restrictions for behind-closed-doors events we will work with Jamies team to undertake the necessary preparations and risk assessments.

“The LTA is looking forward to bringing tennis back into peoples lives this summer and are excited about events like this inspiring fans to get involved in our sport and pick up a racket.”