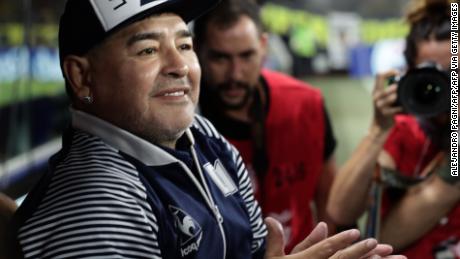 The former Argentine playmaker, who now manages Primera Division side Gimnasia, has seen his club avoid relegation after the season was called off on Tuesday.It's a decision that, according to Maradona, "many say is a new 'hand of God,'" though the 59-year-old dismissed such comparisons."Today, I ask that 'hand' to end this pandemic so the people can live their lives again, healthy and happy," Maradona told Argentina newspaper Clarin, referring to the infamous goal he scored with his hand against England at the 1986 World Cup. "Hopefully, it is understood that what is coming we have to face together for the good of Argentine football," he said. "No one is Rambo to win this war, because even Rambo loses against this (virus)."READ: Thierry Henry and the coronavirus pandemic: Zoom calls, cleaning and how MLS 'has no limits'There are 4,127 confirmed cases of the coronavirus in Argentina, according to the latest tally by Johns Hopkins University.Maradona quit as manager of Gimnasia last year only to return two days later when he said that "political unity" had been achieved at the club."We were convinced that the lads would save us from relegation on the pitch," said Maradona, reflecting on the decision to end the Argentine league amid the pandemic. Read More – Source