In the 12 years since she first appeared for Espanyol, attendances have increased, a television deal has been agreed and a major title sponsor has been signed.However, last month saw the biggest and most important change of them all as the female players in Spain's top division secured an historic league-wide agreement that will guarantee every footballer an annual salary.The minimum full-time player wage agreed for a 40-hour week is €16,000 ($18,000) and for a part-time 30-hour week is €12,000 ($13,600), with both including maternity leave, injury pay and paid holiday."It's the reward for all the hard work we've been putting in for years," Corredera, who now plays for Levante, tells CNN."In the end, not only as female footballers but any female workers we have the rights to have laws and rules that shelter us and protect us — until now we were totally unprotected. "In any situation of unemployment, injury, including maternity, Spanish female footballers didn't have that law that protected them. Now with this new agreement we've taken a step forward in that regard, that players feel secure and, above all, valued for what they are doing as their job."The association of clubs (ACFF) and several players' unions had been locked in negotiations over the league's collective bargaining agreement for almost 18 months, until an agreement was finally reached at the end of February.Much of the delay was down to the ACFF refusing to meet the wage demands for part-time players, which it proposed should have been €8,000 ($9,000) instead of the €12,000 ($13,600) that was eventually agreed on.The stall in negotiations forced the players to take drastic action. In November, the footballers boycotted all eight first division matches during one gameweek, after 189 representatives from the league's 16 clubs voted 93% in favor of taking strike action."We all know well that when the population mobilizes is when people realize that things need to change," Corredera says. "We had been asking for this agreement for some time, for them to confirm it and come to an agreement. "I think clubs as well as the association didn't think that the players would come together and strike. We showed that strength of everyone together and being united was what helped open people's eyes and show that we were serious, that really wanted this agreement and would do everything we possibly could to achieve it."The strike convinced the clubs to reopen negotiations as they successfully sought funding from the Spanish Football Federation (RFEF) — which pays clubs €350,000 ($397,000) per season — and through a television rights deal to meet the players' demands.

For Corredera, the new deal caps off a startling rise for Spanish women's football, both domestically and internationally.The versatile winger left Spain in 2015 to play for Arsenal in the Women's Super League and won both the FA Cup and WSL Cup during her time in England.France's top tier is widely considered the best in Europe, though arguably the talent is far more concentrated at the top of the division compared to larger spread in England's WSL.Lyon has dominated the Champions League in recent seasons, winning the last four editions, while French clubs have made up five of the last eight finalists.However, Spain had its breakthrough year in the competition last season as Barcelona became the first Spanish club in Champions League history to reach either the semifinals or the final. 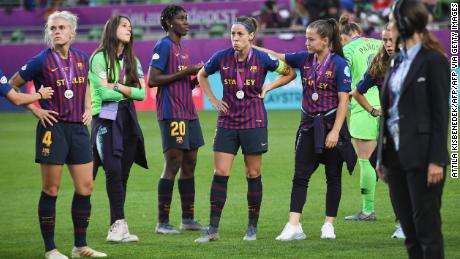 Though Barcelona eventually lost 4-1 to Lyon, Correrdera believes it's evidence that the gap is closing between Spain and its rival European leagues; indeed, the country is guaranteed another semifinalist with Barca and Atletico Madrid facing off in this season's quarterfinals."It's completely different now than it was before," she says of the league's quality. "Above all, the level of the players, the level of the matches have increased a lot. "The matches are a lot more difficult to win because the level of the players has grown. This is down to the fact they are training a lot better, there are trainers, fitness coaches that are more prepared, that understand and work with the female body because we are different (to men). "Thanks to the clubs, the federation, our whole environment, we're improving. Television is supporting us a lot more and people see us more in their homes, people go to games more. We're more visible and started to have more significance in society."We all know that those leagues have been working for many years on a good trajectory and thatRead More – Source