‘We talk to him like he’s not sick,’ says brother of brain-damaged footballer

Nouri collapsed during a pre-season friendly against Werder Bremen in the summer of 2017, suffering serious and permanent brain damage as a result. Appie, as he is known among his former teammates, was just 20-years-old when he was placed into an induced coma. In 2018, his family said they were encouraged by small improvements in his condition as he began to wake up, and Nouri has since returned to a specially adapted home. Despite being able to communicate by smiling and raising his eyebrows, Nouri is still bedridden, his brother Abderrahim says."He's just awake. He sleeps, he sneezes, he eats, he burps, but it's not like he gets out of bed," he said on Dutch television series De Wereld Draait Door on Thursday."We talk to him like he's not sick. We take him into our conversations and we watch football with him in the living room, for example. Then he watches."You notice that he likes that very much. He often shows emotions. Sometimes he is emotional, but often there is also a smile. That does us good. That makes you really appreciate a smile." READ: Jean-Pierre Adams — The 38-year coma that can't stop love

Hoping for a miracle

Nouri played 15 league and cup games for Ajax in 2016-17, scoring one goal in a Dutch Cup tie. Born in Amsterdam to parents of Moroccan descent, he also played for Holland's Under-15, 16, 17, 18, 19 and 20 teams.After the incident, his family was told he wouldn't be able to talk, eat or move independently because he had been starved of oxygen.In June 2018, Ajax admitted to providing "inadequate" on-field medical treatment following his collapse.However, Nouri's father Mohammed says the family is still holding out for a miracle."The intention is that Appie keeps getting better," he told De Wereld Draait Door."We have to take care of him as best we can. We try to do a lot ourselves. We have less nurses and help in the home now. We do a lot ourselves." 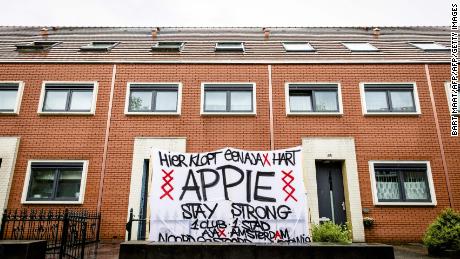 'It was a pleasure to be on the same field'

Nouri was the focus of the television show in the Netherlands which looked back at his life, with interviews from family and a host of former teammaRead More – Source