Mourinho lamented his injury crisis after the first leg, describing the defeat as going into "a gunfight without bullets."On Tuesday, Mourinho didn't even have the luxury of turning up to the second leg with an empty gun.Leipzig was again totally dominant for 90 minutes, only this time it took advantage with two early goals to seal a 3-0 win courtesy of captain Marcel Sabitzer's brace and Emil Forsberg late strike.With just two draws and four defeats from his last six matches, Mourinho is currently suffering the longest winless streak of his 935-match managerial career and is without a win in the Champions League knockout stages for six years."I was very positive yesterday and that's the way I have to be all the time, if I'm not positive it's better not to come to the game," a philosophical Mourinho told BT Sport after the match. "Yes I'm positive, I motivate the players and yes we all believed but we know that in this moment (with injuries) it's all very difficult."They are a very, very strong side … and after our first couple of mistakes they score and the game of course is very, very difficult. They deserved to go through, they were the best team. If I can be critical, I keep it for us. Sometimes difficult moments are moments that can prepare the future in a better way. "Of course there is nobody to blame when it looks like we have a traumatic injury and every traumatic injury ends with months and months (out). It's very hard and the players they gave everything. People can say 'excuses' but I'm pretty sure it's bad for anyone and I don't think anyone would resist to such a situation."Tottenham was lucky to come away from that first leg just one goal behind after RB Leipzig dominated for the vast majority of the match.Aside from a late flurry of attacks in the closing stages, Spurs spent most of the game on the back foot — but the opening 10 minutes of the second leg very much reflected the closing 10 minutes of the first.Mourinho appeared to set out his side in far more attacking fashion; the forward trio of Erik Lamelo, Dele Alli and Lucas Moura were snapping at the heels of Leipzig's defenders and looked lively every time they streamed forward.However, Julian Nagelsmann's Leipzig is a sight to behold when attacking at full tilt, and in the blink of an eye had turned defense into attack to double its advantage on aggregate.On a trademark blistering counterattack, Leipzig's first of the match, star striker Timo Werner reacted quickest to his blocked shot and laid the loose ball off to Sabitzer on the edge of the area.The captain hit a low first time shot that Spurs goalkeeper Hugo Lloris got a hand to but couldn't keep out. 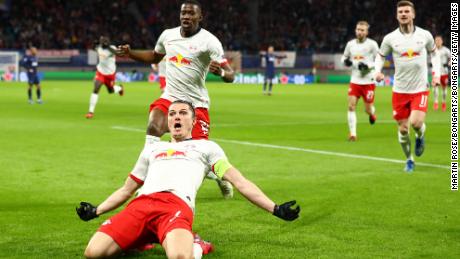 And if there were question marks over Lloris failed attempt at a save for the first goal, alarm bells were ringing for the second.It was Sabitzer again with the goal, turning Angelino's cross in at the near post with his head. Lloris was once again well positioned and got a strong hand to the ball, but once again failed to prevent the goal.Given the Spurs now needed three away goals to progress to the next round, it would seem remiss to not talk about last season's comeback from the same position against Ajax in the semifinals.On that famous night in Amsterdam, Tottenham did indeed find the three second-half goals it needed to progress to the final, though any lingering hopes of deja vu in Leipzig were quickly dispelled in the second half.The host was utterly dominant, sucking the life out of what were now weary Tottenham legs and tired heads.Leipzig did eventually put the Spurs out of Read More – Source