The iconic Maracana in Rio de Janiero — host of the 2016 Summer Olympics and Paralympics and the 2014 FIFA World Cup final — will be transformed to accommodate the rising number of confirmed cases in Brazil. The 78,000-seater stadium, home of 2019 Copa Libertadores winner Flamengo, is just one of several stadiums and convention centers set to be converted. In Sao Paulo — the city with the largest number of confirmed cases and deaths — the mayor's office announced that a combined 2000 hospital beds would be added to the Pacaembu stadium and the Anhembi convention center over the next few weeks.READ: Erling Braut Håland and Jadon Sancho top list of football's most valuable youngstersOther clubs have offered their facilities to tackle the spread of the coronavirus outbreak, including Corinthians, Santos, Sao Paulo and Goias — which said it would offer its Serrinha stadium as a vaccination center.The Brazilian Football Confederation suspended all football last week, amid the coronavirus pandemic. The decision came after Gremio players took to the pitch wearing face masks in protest of having to play a match while the South American country battles with Covid-19.Brazil has more than 1500 confirmed cases of coronavirus and 25 deaths, according to the Brazilian Health Ministry. 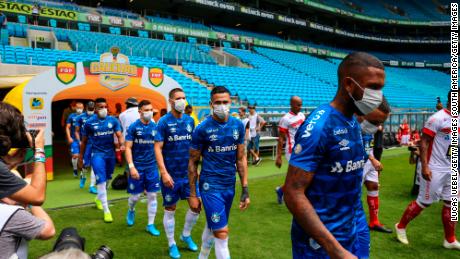 Built in a country with a rich footballing heritage, the Maracana stands head and shoulders above other stadiums in terms of its memorable moments. It was originally built for the 1950 FIFA World Cup, hosting the final between Brazil and Uruguay (which Brazil lost) in front of a crowd of nearly 200,000, making it the world's largest stadium by capacity at the time.And it was at the Maracana that Brazil's Pele, regarded by many as the greatest footballer in history, became the first player to score 1000 professional goals.Read More – Source